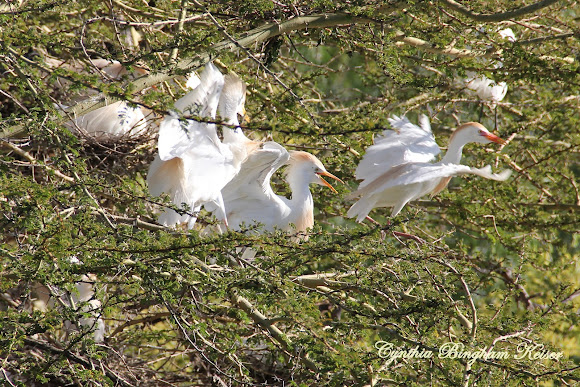 These wild birds migrate here to nest. There is one tree that has dozens of nests and birds! The last image shows the proximity of nests. There were several disputes as well as nest building that you can see in this series. "The Cattle Egret is a stocky heron with a 88–96 cm (35–38 in) wingspan; it is 46–56 centimetres (18–22 in) long and weighs 270–512 grams (9.5–18.1 oz). It has a relatively short thick neck, sturdy bill, and a hunched posture. During the breeding season, adults of the nominate western subspecies develop orange-buff plumes on the back, breast and crown, and the bill, legs and irises become bright red for a brief period prior to pairing. The sexes are similar, but the male is marginally larger and has slightly longer breeding plumes than the female." - Wikipedia

One tree at the San Diego Zoo Safari Park. "The Cattle Egret has undergone one of the most rapid and wide reaching natural expansions of any bird species. Originally native to parts of Asia, Africa and Europe, it has undergone a rapid expansion in its distribution and successfully colonized much of the rest of the world." - Wikipedia

A juvenile can be seen at my other spotting: http://www.projectnoah.org/spottings/126...

Thank you Gerardo. This was an amazing day!