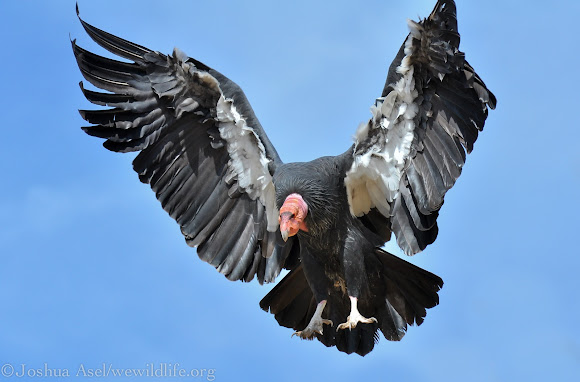 A Critically Endangered animal that came back from complete extinction in the wild and where efforts are still in full swing to bring it back to full potential. During the 1980's, the complete extinction of wild California Condors was all but guaranteed. In 1987, the last wild California Condor was taken to join the remaining 26 captive condors in an effort to boost the population through breeding programs... It succeeded. Today, their numbers, in the wild, have escalated to an all-time high of 430-still a sad blip in the existence of North America's largest land bird. California Condors themselves are visually striking. They have black bodies, near ten foot wingspans, and faces the colors of sunsets. Being vultures, we depend on their ability to cleanse our ecosystems of deceased animals.

Thanks Luis :) I appreciate it.

Thanks Tom! Yeah they are really something. They make the local Golden Eagles look small.

Congrats Joshua. Great pics and the last one gives a good idea of the huge size of these birds.

Thank you very much Antonio and Reza! Much appreciated.

Great series Joshua ,congrats on the well deserved SOTW and thanks for sharing

Thank you very much Yasser! I deeply appreciate the honors. And thank you Daniele :)

Josh, growing up in California in the 80s, I remember how close we came to losing these amazing animals forever. It is such a great comeback story and here's to hoping their numbers keep rising. What an incredible bird and thanks for sharing these awesome photos. This series has been selected as our Project Noah Rangers' Spotting of the Week.

Thanks Fyn and Rangers :) It's an honor.

Thank you AlbertKang and Ashley :)

Great series of pictures and information!