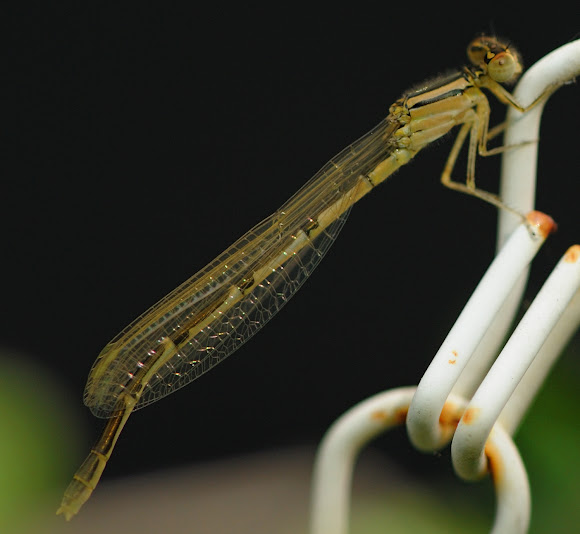 Damselflies (suborder Zygoptera) are insects in the order Odonata. Damselflies are similar to dragonflies, but the adults can be distinguished by the fact that the wings of most damselflies are held along, and parallel to, the body when at rest. Furthermore, the hindwing of the damselfly is essentially similar to the forewing, while the hindwing of the dragonfly broadens near the base. Damselflies are also usually smaller than dragonflies and weaker fliers in comparison, and their eyes are separated. Damselflies undergo incomplete metamorphosis, with an aquatic nymph stage. The female lays eggs in water, sometimes in underwater vegetation, or high in trees in bromeliads and other water-filled cavities. Nymphs are carnivorous, feeding on daphnia, mosquito larvae, and various other small aquatic organisms, using extendable jaws similar to those of the dragonfly nymph. The gills of damselfly nymphs are large and external, resembling three fins at the end of the abdomen. After moulting several times, the winged adult emerges and eats flies, mosquitoes, and other small insects. Some of the larger tropical species are known to feed on spiders, hovering near the web and plucking the spider from its nest.

Zygoptera comes from the Greek zygo meaning joined or paired and ptera meaning wings. They have two pairs of similar wings, unlike the dragonflies (suborder Anisoptera), whose hind wings are broader than their forewings. Damselflies also can fold their wings up over their backs, and dragonflies cannot.

strike that last comment!!!! - I meant to write damselfly

Is it a mayfly instead? wings are pointed back instead of out to the sides......beautiful!