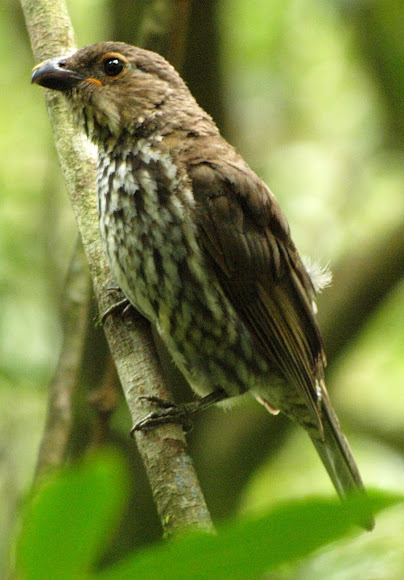 It is of medium size (24-27cm), olive-brown in colour, and has a dark bill. is a stocky brownish bird with scaly underparts. The thick bill has a slight hook, which gives it the first common name.

Throughout the breeding season, these birds are found in tropical rainforest, although they will stray to areas surrounding rainforest at other times of year.

The stage: This species is unlike other bowerbirds as the male bird does not build a bower, instead he clears a small area of land. This is referred to as his stage or court, and because of this the bird is also known as the Stage-maker. The dark bill has notches in it used to cut off leaves for use in decorating his stage. The male uses the same area of rainforest floor for constructing his stage as the year before. It is constructed at the beginning of the breeding season from October to January. The stage may be as large as a 4 x 2m clearing. As decorations, he places fresh leaves with their paler sides turned up (to provide greater contrast on the floor of leaf litter and debris) on the ground. He manages to detach these leaves from trees by using a difficult gnawing action through their stems. Up to 180 small leaves may be collected for a single stage, and the males compete and copy each other to find the biggest or most valuable leaves for their own use. Some birds prefer large leaves, and those of the wild ginger plant (up to 50cm long) have been seen used. As leaves dry out, or if they become saturated from the rain, they will be pushed aside to form a pile to the side of the stage. Attracting a Mate: The male also has an extensive variety of calls that can be heard throughout the rainforest at this time to attract females. He often mimics other bird species or sounds within the rainforest. If he cannot hear one of his neighbours calling, he may raid their stage and steal their leaves (as this may be quicker than obtaining one for themselves). A male may spend 95 percent of the day on average singing from his perch, often 2-3m above his stage. His vocalisations, displays, stage and decorations must all impress visiting females if he is to gain a partner. The males form what is known as an exploded lek – this is a place where they can all hear each other and try to attract females to mate. In winter, the male is inactive and quiet amongst the canopy, and much harder to see and hear. With no bright patterns on his plumage, he blends in to the canopy. Breeding: They may mate with many females in the same season (from October to March). Females depart to lay their eggs (usually 1 to 2) and raise the young alone. Diet: They eat fruit, leaves, stems, buds, insects and their larvae. Distribution: This bird is restricted to the higher altitude rainforests of the north-eastern corner of Australia.