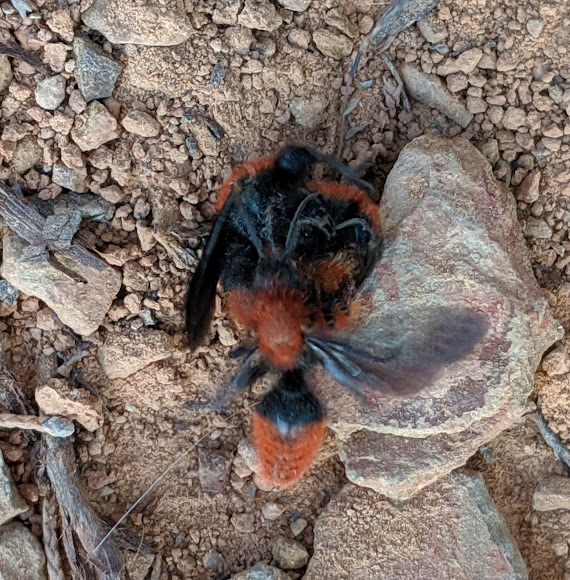 Cow Killers, also called Velvet Ants, are actually a species of wingless wasps. Here you can see how the males (whom looked to be the only ones entering and exiting the hive) have kept their wings. You may be thinking, "But they don't have nests or hives of their own, they are solitary, right?" You're right... I'm not sure what exactly I've captured here. Featured are pictures of a lone male and the couple mating (which other wasps occasionally investigated.) Here is a clear video of the mating: https://www.youtube.com/watch?v=6Ucwsp0e... | And this is a video of a hive. I saw only males entering the holes over and over: https://www.youtube.com/watch?v=3pbkLk7a...

On a very sandy hilltop, high elevation, exposed rock all around. It was an overlook over the Arkansas River. The hive was dug into loose dirt beneath the roots of a tree. There were two of these nests built in the same way under the same kind of tree, although I don't know the species of tree.

Based on my region, I have this labeled D. occidentalis, but in the mating video, if you pause it right after they break apart, the female has no black banding on the abdomen, which to me looks much more like species from the west coast, from oregan to southern california and over to Arizona etc. I'm so confused. Another point to note though, is that on the vibrancy of the red, I've heard they get a little more brown as they age.