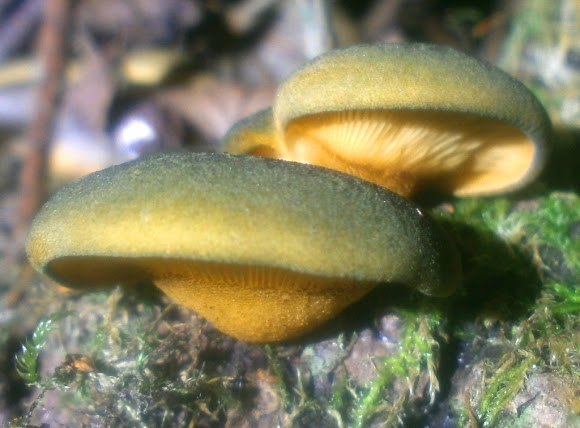 The fruitbodies ranged from 2cm to 7cm across. They were growing on the tree in 5th photo. There was another set growing on a tree with similar leaves and seedheads (6th photo) at the moment I think it's European Alder. In Japanese culture Mukitake is considered one of the most delicious edible mushrooms and a study has shown extracts of this fungus prevents non-alcoholic fatty liver disease (NAFLD) in leptin-resistant db/db mice: http://www.ncbi.nlm.nih.gov/pmc/articles... Previously the Latin name for The Olive Oysterling was Panellus serotinus but it's now listed on fieldmycology.net as Sarcomyxa serotina: http://www.fieldmycology.net/GBCHKLST/gb... The taste of these when I fried them in butter them was slightly bitter and I later read here http://www.first-nature.com/fungi/sarcom... that 'some authorities, including Andreas Gminder [a German mycologist], now say that it can contain carcinogens'. Hooray! The wikipedia article mentions the fungus can be bitter depending on the tree species it is growing on: http://en.wikipedia.org/wiki/Panellus_se... I recently also tried some growing from what looked like a fall beech tree they were also bitter growing from the beech