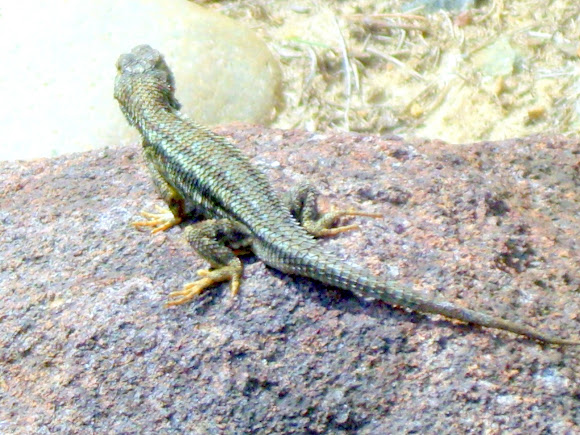 Commonly called “blue-belly” or “swift”, these are probably the most common and commonly seen lizards in California. Black, gray or brown above with dark blotched pattern. Dorsal scales are keeled and pointed so skin looks rough or spiny. Both adult males and females have blue ventral markings with orange or yellow on the undersurface of legs. Sometimes have blue throat patches. Males are usually more brightly colored than females. In a behavior typical of iguanid lizards, they display their ventral color by head bobbing and pushups. This territorial display serves to warn off other males and advertise the lizard’s good health and reproductive fitness to nearby females. Reproduction: Oviparous. 1-3 clutches of 3-17 eggs laid between April and July. Hatch July-September. Food: Insects of various kinds, spiders. Sceloporus occidentalis bocourtii is a subspecies of the Western fence lizard. This taxon, S.o. bocourtii, is found in the state of California, from Sonoma County south to Santa Barbara County. This subspecies is in the family Phrynosomatidae, North American spiny lizards] An alternative name for this subspecies is Coast Range fence lizard. The subspecific name, bocourtii, is in honor of French herpetologist Marie Firmin Bocourt. It seemed agitated and inflated it's throat and started doing push ups. http://en.wikipedia.org/wiki/File:Coast_... this picture is very similar to my spotting. According to this link the spotting could be coast Fence Lizard. possibly courtship colors.

Has adapted well to human habitation. Makes use of woodpiles, decks, fences, and buildings as well as the chaparral, grassland and woodland that are its natural habitat. Prefers such areas with rock outcroppings or fallen trees. Principal methods of defense are camouflage, speed, and the ability to leave a briskly wiggling portion of its tail behind while the lizard makes its escape. Care should be taken when handling these animals as the tail is quite easily shed. It will eventually grow back but in the meantime the lizard is without this very effective defense. Diurnal.

Anoles are rare in California and description does not fit that of Alligator Lizard according to Cindy who spotted one very recently. http://www.backyardnature.net/n/09/09042... http://www.wildherps.com/species/S.occid... http://www.californiaherps.com/lizards/p...

Thanks Joshua. This one had a prominent dewlap.

Heya Hemma. So im thinking probably. It doesn't have quite as much blotching as I would think to see and the stripes going down the sides are extremely prominent. The colors are right though. It could be a different sub-species or it could be just some unusual pattering.

Well fence lizards are not the easiest to get down to the sub species level but with the location that you found this lizard I would think it could be either S. o. longipes or S. o. taylori. Great spotting though, nice colors in yours.

abundance of fence lizards is thought to be one reason why Lyme Disease is rare in California.
Studies have shown that Lyme disease is lower in areas where the lizards occur. When ticks carrying Lyme disease feed on these lizards' blood (which they commonly do, especially around their ears), a protein in their blood kills the bacterium that causes Lyme disease. The ticks' blood is therefore cleansed and no longer carries Lyme disease

ID.d as Sceloporous species based on Feed back. Thanks to all.

Hi Emma. I think it is Sceloporus sp. It is not an alligator lizard, anole or skink.

Thank you werdgent ,could very well be. Except that I have seen tons of Western Fence Lizards and have not seen one with a Dew Lap and yellow feet. That does not mean it is not a fence lizard though.
Thank you for your feed back. I will scan thru other pictures to see the blue. I do see a hint of blue like you said.

Emma - I'm no expert either on reptiles or western species, but here's my two cents: if I saw that in the east I would immediately think fence lizard. The eastern and the western look similar, and I'm sure there is color variation within the species. The easiest way to tell is the blue on the abdomen, and I think I see a hint of it on your photo. Were you able to get a better look at it?

http://www.californiaherps.com/behavior/...
I checked out the behaviour and at least that is similar to alizards.

It has the appearance of one of the spiny lizards in the genus Sceloporus. I'll keep looking.