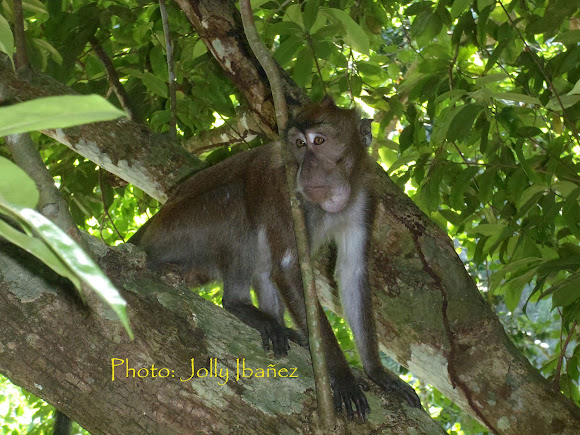 The Philippine long-tailed macaque (Macaca fascicularis philippensis) is a subspecies of the crab-eating macaque. It is found in most Philippine forests and woodlands, but especially in the mangrove forests of western central Philippines— particularly in Palawan, the Visayas, and Mindanao. The names M. f. philippinensis or even M. f. philippinenesis have also been used, but arise from orthographical error.[2]

The Philippine long-tailed macaque has a reddish brown coat. Its tail has an average length of 50 cm to 60 cm. It can reach a height of 40–50 cm (16–20 in). It is the size of a domestic cat. Male macaques weigh 4–8 kg, but females only attain 3–4 kg. The Philippine long-tailed macaque is found on all major Philippine islands (Luzon, Visayas, Mindanao). However, though assessed Near Threatened, it is actually in serious retreat or already extinct in much of its original range.[citation needed] For instance, in Olongapo in Zambales Province (western central Luzon), where a patch of old-growth forest remains, the monkeys have found some refuge;[citation needed] however, they are often road killed, accidentally electrocuted by live wires, and sometimes stoned.