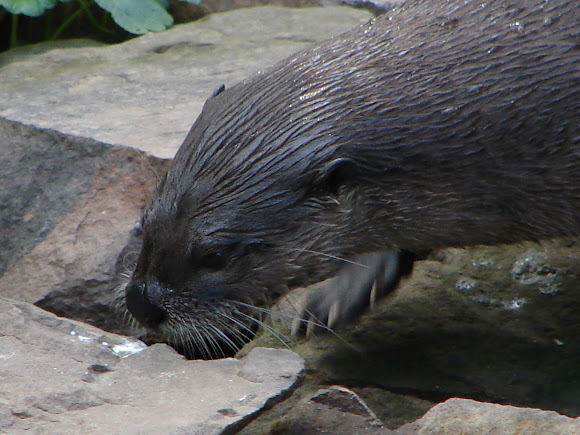 North American river otters are semi-aquatic mammals, with long, streamlined bodies, thick tapered tails, and short legs. They have wide, rounded heads, small ears, and nostrils that can be closed underwater. The vibrissae are long and thick, reflecting their importance in sensory perception. The fur is dark brown to almost black above and a lighter color ventrally. The throat and cheeks are usually a golden brown. The fur is dense and soft, effectively insulating these animals in water. The feet have claws and are completely webbed. Body length ranges from 889 to 1300 mm and tail length from 300 to 507 mm. Weight ranges from 5 to 14 kg. Males average larger than females in all measurements.

River otters are primarily found along rivers, ponds and lakes in wooded areas but they will roam far from water if necessary. River otters were once found throughout North America but due to over hunting for their pelts they are now rare or extinct in local areas. Today they are still endangered but are slowly making a comeback.

As carnivores they are primarily fish eaters but will also consume frogs, crayfish and shellfish as well as small rodents. Males and females do not associate except during the mating season. Males often breed with several females, probably those whose home ranges overlap with their own. Males and females come together to breed in late winter or early spring. Gestation lasts two months, but the young may be born up to a year after mating because these otters employ delayed implantation of the fertilized egg in the uterus. Births occur from November to May, with a peak in March and April. Females give birth to from 1 to 6 young per litter, with an average of 2 to 3, in a den near the water. They are born with fur, but are otherwise helpless. They open their eyes at one month of age and are weaned at about 3 months old. They begin to leave their natal range at from 6 months to a year old. Sexual maturity is reached at 2 to 3 years of age. Lifespan is 10-20 years. Otters are thought of as playful animals and will romp and wrestle with each other. On snow they like to slide on their bellies. Sometimes their play can be confused as work such as rolling in dirt to dry their fur. Otters make a number of sounds to communicate: chirps, chitterning noises, low chucklings and grumblings. A scream is the danger call. All info from Elmwood Park Zoo website, cited here.