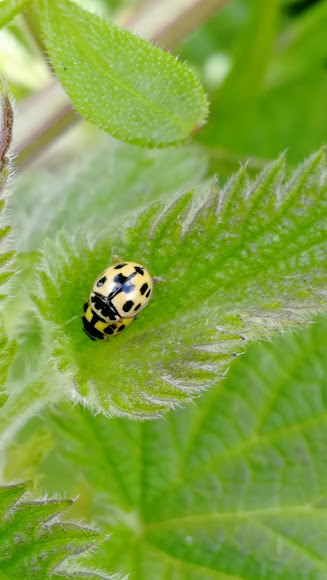 The beetles are 3.5 to 4.5 millimeters long and have an uncommon variety of forms. There are well over 100 different color and pattern variations. Some differ to the extent that, at first, they were considered separate species. The background color ranges from cream through yellow to light orange, but not red. Usually, they have 14 black, almost rectangular spots on the elytra, but only rarely there are 14 separate spots. Most commonly, several of the spots fuse into larger markings, particularly along the midline, where they often create a shape resembling an anchor, sometimes fusing to such an extent that the yellow disappears almost completely as to render the body almost entirely black except for 12 pale yellow spots. The pronotum is whitish or pale yellow, with four to eight black spots. The antennae and legs are yellowish brown.

Found on nettles near woodland and fields

Very little is lady-like about them. ;-)

Thank you for the information on the lady beetle Jamie Grant.

Hi Swain, here's some stuff I found off of the internet:

The name "ladybird" originated in Britain where the insects became known as "Our Lady's bird" or the Lady beetle. Mary (Our Lady) was often depicted wearing a red cloak in early paintings, and the spots of the seven-spot ladybird (the most common in Europe) were said to symbolise her seven joys and seven sorrows.

Why is it called a ladybeetle?