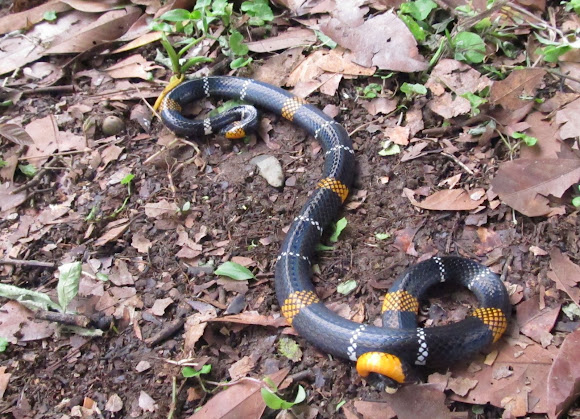 This coral snake is found on the Amazonian slopes of the Andes and the Amazon Basin in most countries North of the Amazon River, and in Bolivia. This individual was found on a trail (670 masl) in the early morning hours in the Amazon rainforest of SE Ecuador. M. hemprichii ortoni prefers moist leaf litter on the forest floor.

There are two subspecies recognized: M. h. hemprichii in eastern Colombia, Southern Venezuela, the Guianas, and northeastern Brazil. This specimen is a M. h. ortoni, which is found along the Orinocoan and Amazonian slopes of the Andes in Colombia, Ecuador, Peru and Bolivia. Their diet, along with snakes as with other corals, includes amphisbaenas, lizards and their principal food, the velvet worm (Peripatus sp.).

Tis true. Unfortunately (most would say fortunately) I don't see them very often. Twice in 33 years. Definitely a nice looking snake. Thanks Cole.

cole15 a year ago

One of the coolest animals I have ever seen

You are welcome Maria. I appreciate all you rangers do for this site.

Thanks for the additional information, Tukup!

Thanks Maria. Yes, it is a true coral. In the US the rhyme, "Red on yellow kill a fellow, red on black venom lack (friend of Jack) works, but it doesn't down here. 4 of the 6 corals in our area have red on black. Of the other two, one doesn't really have rings and the other is speckled and it's hard to tell what color is next to what color. The only sure way I know of is to look for the loreal scale. If it is present, it isn't venomous. If it isn't, it may be venomous.

Very nice spotting! Is this a venomous snake?

Thanks Daniele. This is a somewhat rare snake and I am glad to see it recognized in this way.

Your spotting has been nominated for the Spotting of the Week. The winner will be chosen by the Project Noah Rangers based on a combination of factors including: uniqueness of the shot, status of the organism (for example, rare or endangered), quality of the information provided in the habitat and description sections. There is a subjective element, of course; the spotting with the highest number of Ranger votes is chosen. Congratulations on being nominated again Tukup!

Thanks Dawn. Corals are in general pretty nice looking, but this one, with its simplicity is exceptionally neat.

I really like the colors of this cool find! Thank you for sharing!

They really do don't they? Thanks Armadeus.

Orange and black go well together. Beautiful spotting Tukup. Thank you for sharing :)

Thanks Sergio. It was special.

Thanks for the pointer Daniele. I truly appreciate it. Please feel free to let me know how I can do better at any time.

You're welcome Tukup! There can never be too much info ;-) Project Noah has alway tried to encourage users to create original content in notes, and write as much as possible about their personal encounters rather than copy published information (we have reference fields for this). It is of course OK to quote or take for a piece of published information if it is essential to your description. One piece of advice would be to keep Habitat more concise, and put the bulk of your text under notes. Habitat, as per our FAQ, should only be used to describe the actual habitat where your spotting was made. In a scenario where data is parsed and analyzed it greatly helps that this field contains only the required information. I hope this helps :-) But essentially, keep doing what you're doing!

Thanks Daniele. A beautiful snake but seldom seen. Thanks to both of you for the encouragement on the notes too. I never know how much info is too much.

Thanks Neil. I'm going to start putting snakes on now, just one at a time. I figure if I put on 1 per week it will take me well over a year without duplicating :-)

Great pattern on this coral snake Tukup! Excellent and informative notes as always :-)

Beautiful snake and a wonderful spotting, Tukup. Cheers for the notes too :)