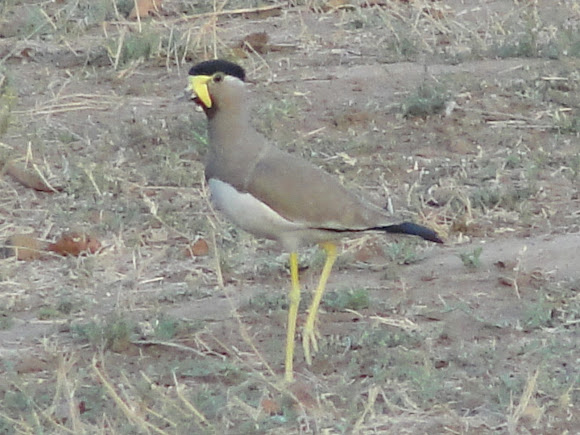 These are conspicuous and unmistakable birds found in dry stony and open grassland or scrub habitats. They are medium-sized pale brown waders with a black crown which is separated from the brown on the neck by a narrow white band and large yellow facial wattles. The chin and throat are black and the brown neck and upper breast is separated from the white belly by a narrow blackish line. The tail has a subterminal black band which does not extend into the outer tail-feathers. There is a white wingbar on the inner half of the wing. The bill is yellow at the base. They have tiny yellow carpal spurs. The crown feathers can be raised slightly in displays. They are mostly sedentary but populations make long distance movements in response to the monsoons. They are occasional visitors to the Katmandu valley in Nepal.

Wow! I love it

Lovely spotting and info. I had seen one some time back but the photos were not good.

Wow, that is unique. Great spotting!