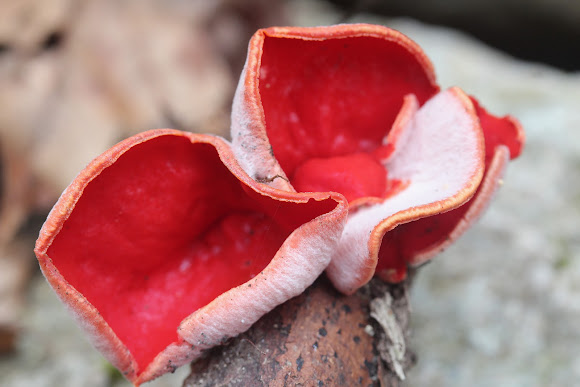 Initially spherical, the fruit bodies are later shallowly saucer- or cup-shaped with rolled-in rims, and measure 2–5 cm (0.8–2.0 in) in diameter. The inner surface of the cup is deep red (fading to orange when dry) and smooth, while the outer surface is whitish and covered with a dense matted layer of tiny hairs.

The saprobic fungus grows on decaying sticks and branches in damp spots on forest floors, generally buried under leaf litter or in the soil. The cup-shaped fruit bodies are usually produced during the cooler months of winter and early spring.

I spotted this in Foping Nature Reserve.

Thanks for the ID Karen. This is a fascinating and well researched fungus.