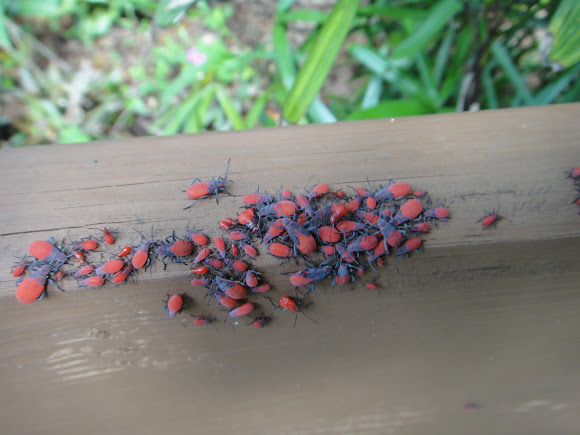 the red-shouldered bug, goldenrain-tree bug or soapberry bug, is a species of true bug that lives throughout the United States and south to northern South America. It feeds on seeds within the soapberry plant family, and is known to rapidly adapt to feeding on particular hosts. People often confuse this species with the boxelder bug. J. haematoloma are typically 9.5–13.5 millimetres (0.37–0.53 in) long and 3–4 millimetres (0.12–0.16 in) wide, though the short-winged form (brachyptera) usually is 7–8 millimetres (0.28–0.31 in) long. Color is mostly blackish (sometimes dark gray or purplish) except for red eyes, "shoulders" (lateral margins of pronotum), and costal margins and dorsal part of abdomen. Nymphs are mostly red with a black pronotum and wingpads. All appendages are blackish.

A study published in 1987, showed the distribution of J. haematoloma "revealed the close correspondence of records for the bug with the ranges of the soapberry plants that serve as the insects native hosts.

(Chinche de lomo rojo - Español) Outside of the United States, J. haematoloma is found south through Central America and the West Indies to Colombia and Venezuela.

I think they might be Red-Shouldered Bug nymphs (Jadera haematoloma). Bug Guide says, "Year-round in Florida, with peak numbers in May in central Florida," so that's about right for your spotting. Firebugs have only recently been introduced to the US, and that was in Utah (Bug Guide again). The nymphs also have black dots on their backs in the photos I've seen, and these don't. The Red-Shouldered Bug photos look more like yours.

Not 100 % sure about this.. color patterns are quite different
Correct me if I'm wrong!

These are juvenile Fire bugs