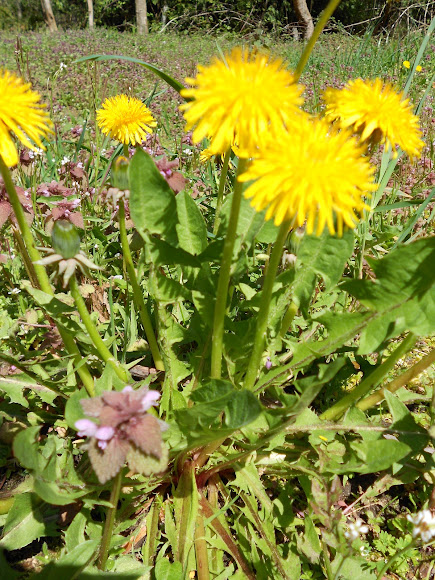 Bright Yellow Flowers, male seeds children call wishes and blow them all away hoping for wishes to come true, and for a lot of those seeds dreams will come true.

Dandelions are grown commercially on a small scale as a leaf vegetable. The leaves (called dandelion greens) can be eaten cooked or raw in various forms, such as in soup or salad. They are probably closest in character to mustard greens. Usually the young leaves and unopened buds are eaten raw in salads, while older leaves are cooked. Raw leaves have a slightly bitter taste. Dandelion salad is often accompanied with hard boiled eggs. The leaves are high in vitamin A, vitamin C and iron, carrying more iron and calcium than spinach.[28] Dandelion flowers can be used to make dandelion wine, for which there are many recipes nother recipe using the plant is dandelion flower jam. Ground roasted dandelion root can be used as a coffee substitute. In Silesia and also other parts of Poland and world, dandelion flowers are used to make a honey substitute syrup with added lemon (so-called May-honey). This "honey" is believed to have a medicinal value, in particular against liver problems.Dandelion is a rich source of vitamins A, B complex, C, and D, as well as minerals such as iron, potassium, and zinc.Traditionally, dandelion has been used a diuretic, to increase the amount of urine the body produces in order to get rid of excess fluid. It has been used for many conditions where a diuretic might help, such as liver problems and high blood pressure. However, there is no good research on using dandelion as a diuretic in people. Fresh or dried dandelion herb is also used as a mild appetite stimulant and to improve upset stomach. The root of the dandelion plant may act as a mild laxative and has been used to improve digestion. There is some very preliminary research that suggests dandelion may help improve liver and gallbladder function, but the study was not well designed. Some preliminary animal studies also suggest that dandelion may help normalize blood sugar levels and lower total cholesterol and triglycerides while raising HDL, "good," cholesterol in diabetic mice. But not all the animal studies have found a positive effect on blood sugar. Human studies are needed to see if dandelion would work in people.