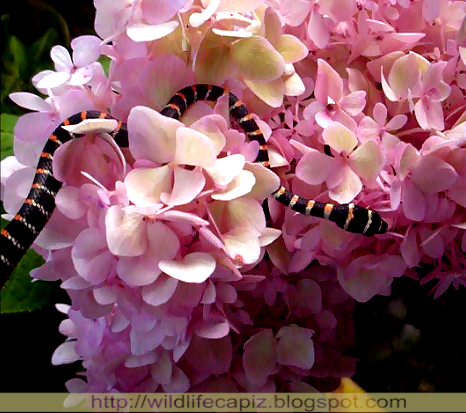 A rare sub-species of Paradise Flying tree Snake, I claim a 90 % probability that this is a new sub-species. It is closely related to Chrysopelea ornata in coloration and pattern so my Father and I plotted the following differences to separate the two species. Chrysopelea ornata My specimen Red-orange spots on the yellowish Red-orange (continues) line white stripes from the neck up to the along the dorsal line from the end of the tail. base of the head up to the anal vent section. The tail is all black black and white stripes with no red coloration. Four yellowish white stripes on Three stripes on the head. No the head with four yellowish spots no sign of any spot. between the stripe at the base of the head and the stripe at the back of the eyes. White stripes are speckled Clean cut, neat black and with black along the sides. white stripes. The details we've listed applies to juvenile and adult of both specimens. My specimen is a 12 inches long juvenile. It feeds mainly on small house lizards. It wriggles its tail to mimic a caterpillar in order to attract and lure its prey.

My uncle found it in the fresh/ brackish swamp area . He told me that he also found bigger adults of this species for several times.

On the video, I'm holding it in order to show how small this snake is. This specimen was actually found by my uncle washed off when a neck -level flood hit the area where he had his fishpond.. It was very weak so he decided to rescue it even though he's not sure if its venomous or not. We took care of it for several days then we release it back to where it was found after the flood. So far, I've done a research and I did not find any official recorded sightings of this species or sub-species in the Philippines.

Thanks for the advise gangc26 , we almost have identical Flora and Fauna though I think you have move amazing wildlife in your place. I hope too see more of them in your spottings.

I'm from Malaysia, hope you can get the photo next time and share with us, as the color for the young looks quite interesting, so i'm wonder how the adult going to looks like. :)

You're right about the changing of colors as a paradise snake ages. But the red dorsal spot of these snakes does not change or remains a spot from juvenile to adulthood . My specimen has a continues red dorsal color. And just lately we discovered some adults ( bigger ones 0.75 - 1 inch in diameter , must be an adult having this size) of this snakes on the highland forest of our region (unfortunately I wasn't able to take some photo). What makes me conclude its a special species of paradise snake is it has the same color with he smaller ones we found. But the locals told us that they are venomous. Just curious gangc26 , are you from the Philippines too?

I think you should keep it for further observation, to see what it turn into as an adult, i believe the black bands will become broader and fade as it growth, just like the rest of the Paradise Tree Snake (Chrysopelea paradisi).
While, just a thought, as i'm not familiar with the sp. endemic in Philippines.

Beautiful, you have some very nice photos and information in your spottings. I love learning about animals in new places, thanks for sharing with Project Noah.