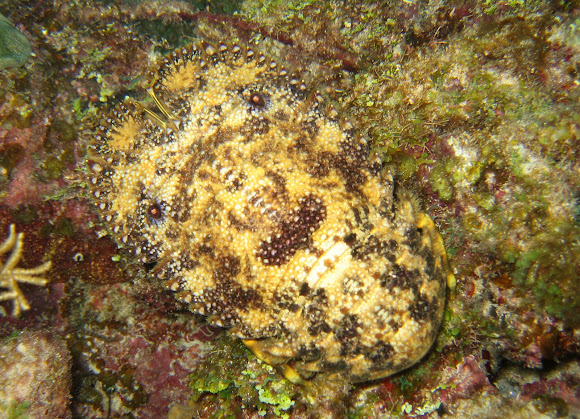 Photo take at -35 ft on a Caribbean reef during a night dive this lobster has nocturnal habits. Behind gastric spine of carapace two doubletopped spinules present. Denticles on outer margin of last segment of antenna smaller. Sculpturation of abdomen very distinct, the naked elevated parts distinct and separated by narrow hairy grooves. The median figures with broad lateral lobes. Naked area along posterior margin of somites 2-5 occupying almost half the length of the somites. Legs slender, propodus of second leg about five to six times as long as wide. Propodus, carpus and merus of second to fifth legs each with coloured band.

The species is found on the outer reefs. The larvae are planktonic, from Florida all the Caribbean to Brazil.Total body length up to about 20 cm, carapace length about 4 to 6 cm.

Also know as Spanish Lobster.we call it in this area Cucaracha de Mar.

Thanks Luis we call it Cucaracha de mar is from the lobsters family !
Thanks Harsuame