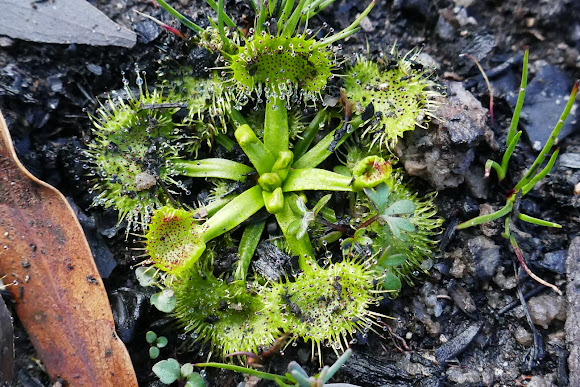 Sundews are a rosetted tuberous species in the carnivorous plant genus Drosera. There are five species of Drosera that have been documented in this national park - http://www.rymich.com/girraween/index.ph... ...all of which are endemic to Australia. I've yet to find a common name for this species. Here's a good description from the Australian Plants Society NSW: "Drosera hookeri, a Sundew.... D. hookeri, in common with all Sundews, is a carnivorous plant that traps insects on specialised hairs carried on the margins and upper surface of the leaves. The hairs are known as tentacles. The soluble parts of the prey are absorbed by enzymes released by the tentacles.... D. hookeri is a small, yellowish green herb that has a white tuber enclosed by a black sheath. The leaves form a flat rosette consisting of about ten circular leaves armed with a dense array of tentacles. In spring white, sometimes pink, flowers are carried on a stalk about 15 centimetres long.... The genus name is from the Greek, “droseros” meaning dewy referring to the glistening of the glandular hairs."

Another ID possibility is the "pimpernel sundew" (Drosera glanduligera). It also has definite stems, as does D. hookeri, unlike other species that have spoon-shaped leaves. This species has not been documented in Girraween, although it is known to occur in southeast Queensland.