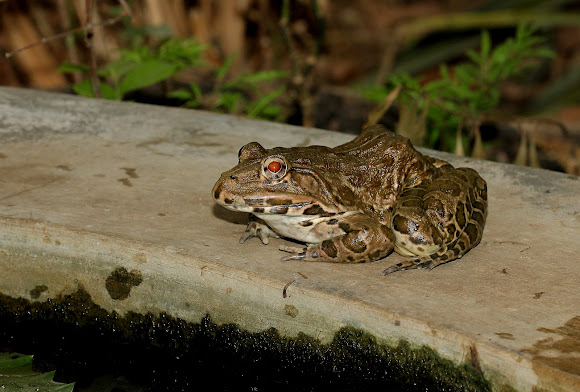 It inhabits holes and bushes near permanent bodies of water.

The Indian Bull Frog is an enigmatic species that was an integral component of any local ecosystem be it a pond, well or field until the upsurge in poaching about 5 years ago. But today the Indian Bullfrog is fighting a losing battle in almost all its past habitats in our state due to a variety of reasons including extensive poaching, habitat loss and alteration and usage of pesticide. Due to the rise in haphazard development, especially on all our plateau areas in the state, the change in land use pattern has reduced vital breeding areas and left little space for this amphibian species to breed and sustain healthy populations. The extensive usage of pesticides has further pushed these crucial indicators of healthy ecosystems to the brink of local extinction as our farmlands and orchards are now repeatedly being abused with inorganic pesticides and fertilizers, which act as a toxin to scores of amphibian species including the Indian Bullfrog. ref site : http://www.savethefrogs.com/frogblog/fro...

Wonderful shot love this one! :)