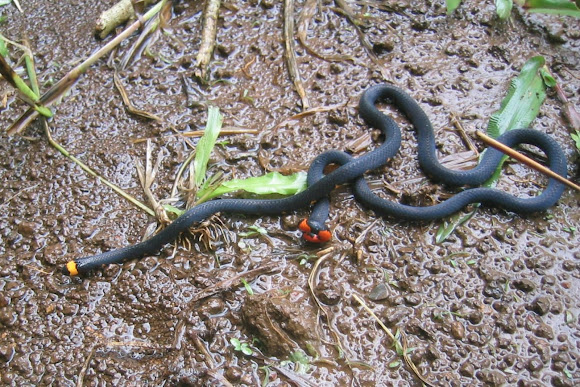 Although this coral snake is very slender (less than the diameter of a pencil) it can reach lengths up to 115 cm. This one measured 89 cm. They are unusual for coral snakes in that they don't prominently exhibit the normal pattern of some combination of red, black, yellow or white bands although there is a yellow nuchal ring at the base of the head (foto #4) and a sometimes-visible ring or two of reddish yellow near the tip of the tail (foto #2-3). There are yellow bands on the venter that sometimes continue up the sides far enough to be seen, but mostly it appears black with a yellow neck-ring.

This diminutive coral snake is found in the Amazon basin of Bolivia, Brazil, Colombia, Ecuador and Peru between 100 and 1500 masl. This one was found crossing a clearing in the Amazon rainforest of SE Ecuador (700 masl).

These are generally very docile snakes that I always assumed had such small mouths that they couldn't bite someone if they wanted to. Well, I can now confirm that they can and although not fatal, it can produce many hours of "discomfort" in the form of continuous deep ache interspersed with shooting pains. I wouldn't recommend it :-) But all in all, a generally timid, very pretty snake. The name has undergone many changes. While some refer to Micrurus melanotus, it appears the accepted form is now Micrurus narducci. The older name was Leptomicrurus narducci melanotus.

Yes, not at home, or anyplace else really :-) Thanks Neil.

Wow, that is an amazing snake. Great story too, Tukup. I'm glad to hear you're ok. Don't try this at home, kids...!

Thanks Daniele. They are cool.