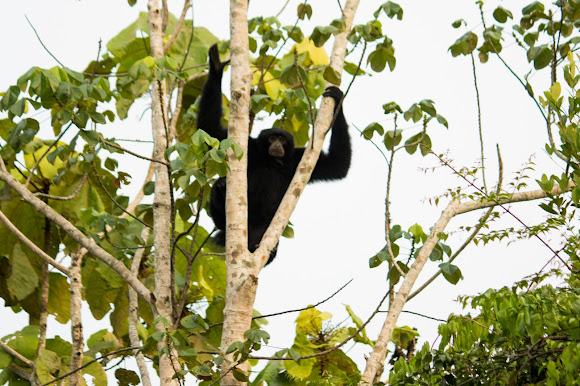 From Wikipedia: The siamang (Symphalangus syndactylus) is a tailless, arboreal, black-furred gibbon native to the forests of Malaysia, Thailand, and Sumatra. The largest of the lesser apes, the siamang can be twice the size of other gibbons, reaching 1 m in height, and weighing up to 14 kg. The siamang is the only species in the genus Symphalangus. The siamang is distinctive for two reasons. The first is that two digits on each foot are partially joined by a membrane—hence the name "syndactylus", from the Ancient Greek sun-, "united" + daktulos, "finger". The second is the large gular sac (found in both males and females of the species), which is a throat pouch that can be inflated to the size of the siamang's head, allowing the animal to make loud, resonating calls or songs.

Seen near the village of Muara Hemat, on the edge of the Kerinci Seblat National Park, Sumatra, Indonesia.

There is not much I enjoy more than waking up to their songs breaking through the early morning mist of the rainforest. Magical. I saw this guy, and possibly 2-3 others, as I was checking a nearby camera trap on a ridge trail. Was lucky to get such a clear shot from so close, as they broke through the top of the canopy.

I love their sound! Lovely!