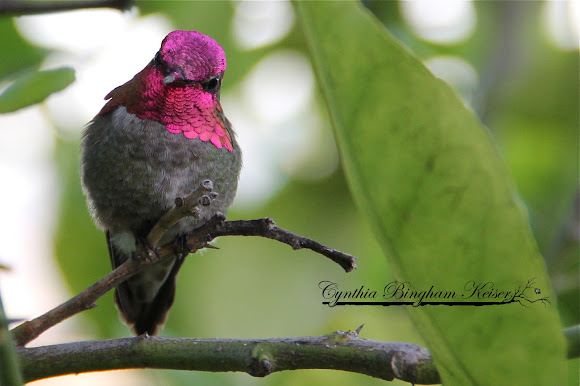 My daughter and I were less than four feet from this beauty looking for insects when I noticed him. Green and gray hummingbird with a magenta head and throat. "Anna's Hummingbird is 3.9 to 4.3 inches (10 to 11 centimeters)long. It has a bronze-green back, a pale grey chest and belly, and green flanks. Its bill is long, straight and slender. The adult male has an iridescent crimson-red crown and throat, and a dark, slightly forked tail. Anna's is the only North American hummingbird species with a red crown. Females and juveniles have a green crown, a grey throat with some red markings, a grey chest and belly, and a dark, rounded tail with white tips on the outer feathers." - Wikipedia

Pomelo tree in backyard. "Anna's Hummingbirds are found along the western coast of North America, from southern Canada to northern Baja California, and inland to southern Arizona. They tend to be permanent residents within their range, and are very territorial. However, birds have been spotted far outside their range in such places as southern Alaska, Saskatchewan, New York, Florida, Louisiana and Newfoundland." - Wikipedia

The hummingbird is the only bird known to be able to fly backwards. This makes it Wildlife with Innovative Defense to be able to flee. This species also qualifies for Wildlife with Special Adaptations with its sonation during display. "The outer tail-feathers of male Anna's Hummingbird (Calypte anna) vibrate during display dives and produce a loud chirp. When courting, the male ascends some 30m before diving over an interested female at high speed and producing a high-pitched sound. Experiments showed that the birds could not make the sound when missing their outer tail-feathers, and that those same feathers could produce the dive-sound in a wind tunnel. The bird can sing at the same frequency as the tail-feather chirp, but its weak syrinx is not capable of the same volume. " - Wikipedia

Thank you Desmond and Mary :)

Thank you for the invite, Marta! I'll add all of my hummingbirds to your mission :)

I would like to invite you to post your spottings of hummingbirds in the new mission for Hummingbirds of the New World:
http://www.projectnoah.org/missions/1244...
:-)

Definitely possible. I see what you're saying about the gorget but it matches the leading image on the reference link (allaboutbirds). Perhaps the angle of the head makes the gorget appear differently?

Since I first commented I've done some research, because I had an anna's that looked a lot like a Costa's in terms of shape. I found there are hybrids. Yours has a similar shape and the trailing gorget

Thank you micaela2 and Mark! Not sure what happened to #5. it will take a while to hunt it down in my archives to re-upload. May have to dedicate a night to stroll down memory lane :)

Superb. Something about the third shot really jumps. Pic 5 is dead?

What camera do you use? This is amazing!

Thank you! Thanks to this beautiful and mellow guy as well!

Congratulations for the Best of 2012 spots!

Awesome spotting. This is truly fantastic. Congratulations on the achievement, and what better spotting to do with but your 2000th spotting!? :)

Awsome Cindy! Congratulations! Recognition for such a beautiful series :)

Wow! Thank you Karen, Yasser and Peter! This is indeed a great honor. I'm in amazing company with the Best of 2012 spots! Thank you to this awesome community for favoriting and commenting on this lucky spotting!

Oh yes one of my favorites Congratulations Cindy :):)

and 113 other people favorited this spotting