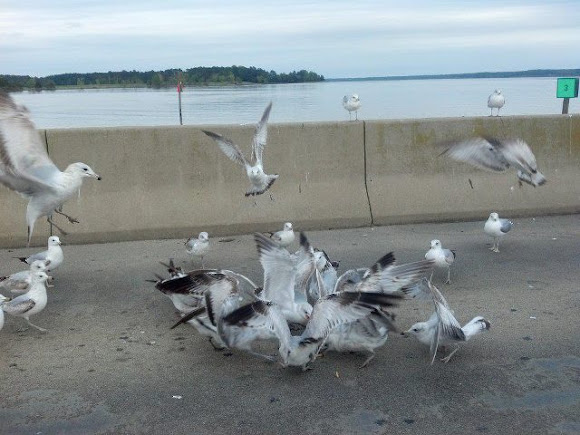 Gull species range in size from the Little Gull, at 120 g (4.2 oz) and 29 cm (11.5 inches), to the Great Black-backed Gull, at 1.75 kg (3.8 lbs) and 76 cm (30 inches). They are generally uniform in shape, with heavy bodies, long wings, moderately long necks . The tails of all but three species are rounded; the exceptions being the Sabine's Gull and Swallow-tailed Gulls, which have forked tails, and the Ross's Gull, which has a wedge-shaped tail. Gulls have moderately long legs (certainly longer than the terns) with fully webbed feet. The bill is generally heavy and slightly hooked, with the larger species having stouter bills than the smaller species. The bill colour is often yellow with a red spot for the larger white-headed species and red, dark red or black in the smaller species. The gulls are generalist feeders, indeed they are the least specialised of all the seabirds, and their morphology allows for equal adeptness in swimming, flying and walking. They are more adept walking on land than most other seabirds, and the smaller gulls tend to be more manoeuvrable while walking. The walking gait of gulls includes a slight side to side motion, something that can be exaggerated in breeding displays. In the air they are able to hover and they are also able to take off quickly with little space. The general pattern of plumage in adult gulls is a white body with a darker mantle; the extent to which the mantle is darker varies from pale grey to black. A few species vary in this, the Ivory Gull is entirely white, and some like the Lava Gull and Heermann's Gull have partly or entirely grey bodies. The wingtips of most species are black, which improves their resistance to wear and tear, usually with a diagnostic pattern of white makings. The head of gulls may be covered by a dark hood or be entirely white. The plumage of the head varies by breeding season; in non-breeding dark-hooded gulls the hood is lost, sometimes leaving a single spot behind the eye, and in white-headed gulls non-breeding heads may have streaking.

The gulls have a worldwide cosmopolitan distribution. They breed on every continent, including the margins of Antarctica, and are found in the high Arctic as well. They are less common on tropical islands, although a few species do live on islands such as the Galapagos and New Caledonia. Many species breed in costal colonies, with a preference for islands, and one species, the Grey Gull, breeds in the interior of dry deserts far from water. There is considerable variety in the family and species may breed and feed in marine, freshwater or terrestrial habitats. Most gull species are migratory, with birds moving to warmer habitats during the winter, but the extent to which they migrate varies by species. Some species migrate long distances, like the Franklin's Gull, which migrates from Canada to wintering grounds in the south of South America. Other species move much shorter distances and may simply disperse along the coasts near their breeding sites.