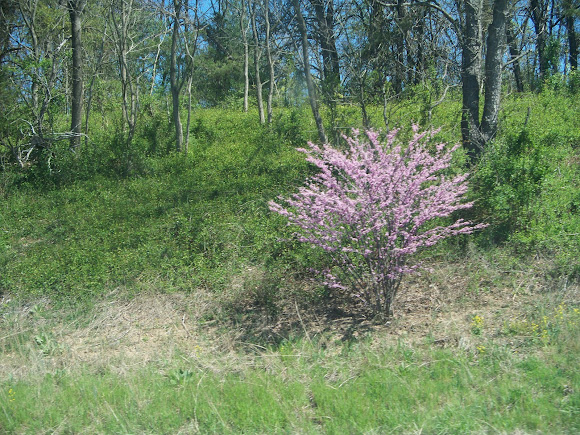 A small tree with a sturdy upright trunk which divides into stout branches that usually spread to form a broad flat head. Found on rich bottom lands throughout the Mississippi River valley; will grow in the shade and often becomes a dense undergrowth in the forest. Very abundant in Arkansas, Oklahoma, and eastern Texas. Hardy far north; grows rapidly; is a satisfactory ornamental tree. Many trees are sterile and produce no fruit. It is also known as the Judas tree. This tree is difficult to grow as far west as western Kansas and Colorado, as there is not sufficient water. Its far northern range of growth is southern New England. It grows well in New York State, New Jersey and southward. Bark: Red brown, with deep fissures and scaly surface. Branchlets at first lustrous brown, later become darker. Wood: Dark reddish brown; heavy, hard, coarse-grained, not strong. Sp. gr., 0.6363; weight of cu. ft. 39.65 lbs. Winter buds: Chestnut brown, obtuse, one-eighth inch long. Leaves: Alternate, simple, heart-shaped or broadly ovate, two to five inches long, five to seven-nerved, chordate or truncate at the base, entire, acute. They come out of the bud folded along the line of the midrib, tawny green; when they are full grown they become smooth, dark green above, paler beneath. In autumn they turn bright clear yellow. Petioles slender, terete, enlarged at the base. Stipules caduceous. Flowers: April, May, before and with the leaves, papilionaceous. Perfect, rose color, borne four to eight together, in fascicles which appear at the axils of the leaves or along the branch and sometimes on the trunk itself. Calyx: Dark red, campanulate, oblique, five-toothed, imbricate in bud. Corolla: Papilionaceous, petals five, nearly equal, pink or rose color, upper petal the smallest, enclosed in the bud by the wings, and encircled by the broader keel petals. Stamens: Ten, inserted in two rows on a thin disk, free, the inner row rather shorter than the others. Pistil: Ovary superior, inserted obliquely in the bottom of the calyx tube, stipitate; style fleshy, incurved, tipped with an obtuse stigma. Fruit: Legume, slightly stipitate, unequally oblong, acute at each end. Compressed, tipped with the remnants of the style, straight on upper and curved on the lower edge. Two and a half to three inches long, rose color, full grown by midsummer, falls in early winter. Seeds ten to twelve, chestnut brown, one-fourth of an inch long -can be made to germinate by first dipping in boiled (99C) water (very hot) for a minute and then sowing in a pot (do not boil the seeds); cotyledons oval, flat.

Thanks for ALL the detail, always more to learn.