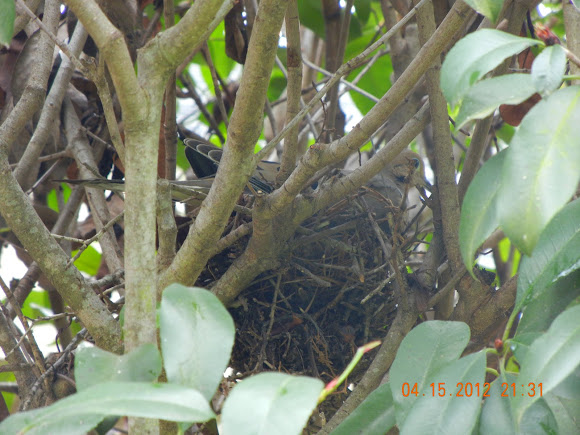 The plumage is generally light gray-brown and lighter and pinkish below. The wings have black spotting, and the outer tail feathers are white, contrasting with the black inners. Below the eye is a distinctive crescent-shaped area of dark feathers. The eyes are dark, with light skin surrounding them. The adult male has bright purple-pink patches on the neck sides, with light pink coloring reaching the breast. The crown of the adult male is a distinctly bluish-grey color. Females are similar in appearance, but with more brown coloring overall. The iridescent feather patches on the neck above the shoulders are nearly absent, but can be quite vivid on males. Juvenile birds have a scaly appearance, and are generally darker.

The Mourning Dove occupies a wide variety of open and semi-open habitats, such as urban areas, farms, prairie, grassland, and lightly wooded areas. It avoids swamps and thick forest. The species has adapted well to areas altered by humans. It commonly nests in trees in cities or near farmsteads.

Finally got some good pictures, they must have laid the eggs around the 14th because they are now taking turns watching the nest. Once the eggs hatch I'll upload alot more.