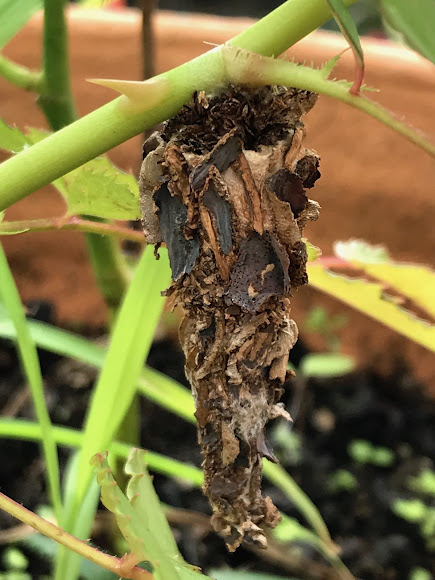 The caterpillar larvae of the Psychidae construct cases out of silk and environmental materials such as sand, soil, lichen, or plant materials. These cases are attached to rocks, trees or fences while resting or during their pupa stage, but are otherwise mobile. The larvae of some species eat lichen, while others prefer green leaves. In many species, the adult females lack wings and are therefore difficult to identify accurately. Case-bearer cases are usually much smaller, flimsier, and consist mainly of silk, while bagworm "bags" resemble caddisfly cases in their outward appearance – a mass of (mainly) plant detritus spun together with silk on the inside. Bagworm cases range in size from less than 1 cm to 15 cm among some tropical species. Each species makes a case particular to its species, making the case more useful to identify the species than the creature itself. Cases among the more primitive species are flat. More specialized species exhibit a greater variety of case size, shape, and composition, usually narrowing on both ends. The attachment substance used to affix the bag to host plant, or structure, can be very strong, and in some case require a great deal of force to remove given the relative size and weight of the actual "bag" structure itself. Body markings are rare. Adult females of many bagworm species have only vestigial wings, legs, and mouthparts. In some species, parthenogenesis is known. The adult males of most species are strong fliers with well-developed wings and feathery antennae but survive only long enough to reproduce due to underdeveloped mouthparts that prevent them from feeding. Their wings have few of the scales characteristic of most moths, instead having a thin covering of hairs.

Our garden in Windwardside at the foot of MountScenery, a volcano on Saba in the Caribbean Sea.

I first thought this thing was a bit of dirt attached to our porch and I swiped it away. While swiping it I felt it was attached and somehow stringy. I also noticed the bits of silk still attached to the porch. It fell on the floor next to the rose plant and at that time I did not have time to do something about it. The next day (today) I remembered the thing so I went to investigate. I could not find it where it had dropped and suddenly my eye caught it hanging on the branch of my tiny rose bush! It had moved itself to the branch and attached! On close inspection I can see the small bits of plant matter clinging onto the cocoon with silk. How FASCINATING! I am so glad it wasn't hurt. New spotting of same Bagwom Moth and pictures of it's head here https://www.projectnoah.org/spottings/20...

I have posted an update on the Bagworm moth, now with close ups of it's little head peaking out.
Check out https://www.projectnoah.org/spottings/20...

Thanks ornithoptera80 and Tukup.
Mark Ridgway...it has returned! I will post soon a new posting with close up of worm and even a video (if it lets me post it)
It has moved and is now hanging on our porch (the initial place it was) and pops his/her head out during the day. Fascinatiing
No idea if it is endemic to this island. Not easy to find out.
I will try and let you know.

Congratulations. Are you going to grow it out? I'm curious if is endemic to your island or introduced.

Wow! Thank you Michael Sarill for the SOTW! I am very honored! And thank you Sergio Monteira and AntonioGinjaGinja.

Great series Muckpuk,congrats on the well deserved SOTW and thanks for sharing

Muckpuk, your spotting has been voted Spotting of the Week!

Rangers appreciated the uniqueness of this spotting, educational notes on the relationship between host plant and insect and the story behind the spotting.

I know MariadB! I could not believe it. What was even more interesting is that for the next weeks it has been moving up and down the rose bush! AND it added more sticks to "itself". The last time I saw it it had a collar of small sticks. But I NEVER saw it move!
When I checked a few days ago it was not on the bush (has been raining and storming here) I hope it will return soon so I can continue to follow its adventures!

That is so interesting that the moth moved itself to a new spot after you removed it. Thanks for sharing this with us!

Thank you Michael Sarill. I am always honored to get a nomination especially for a SOTW.