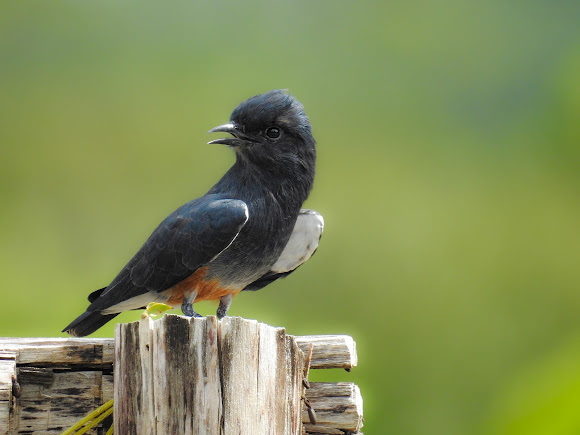 The swallow-winged puffbird (Chelidoptera tenebrosa) is a species of bird in the family Bucconidae, the puffbirds. It is also called the swallow-wing. It is the only species in the genus Chelidoptera.

The swallow-winged puffbird's range is throughout the Amazon Basin to the foothills of the Andes in the west, in Colombia, Ecuador, and Peru. To the east-southeast, the range encompasses the Amazon's adjacent Tocantins-Araguaia River drainage and about 900 km (560 mi) eastward. Southeastwards from the Amazon Basin across the Caatinga, a disjunct population occurs on the southeast coast of Brazil, in a 300–800 km (190–500 mi) wide coastal strip that extends about 3,000 km (1,900 mi). On the north Caribbean coast of South America, in the west nearly all of Venezuela is in the bird's range. The coastal range is continuous eastwards through the Atlantic coastal Guianas, and ends east of the Tocantins-Araguaia drainage in the Brazilian states of Maranhão and Piauí.

The swallow-winged puffbird digs its nest in sandy soil, forming a burrow two or three feet long, where it lays one or two eggs.