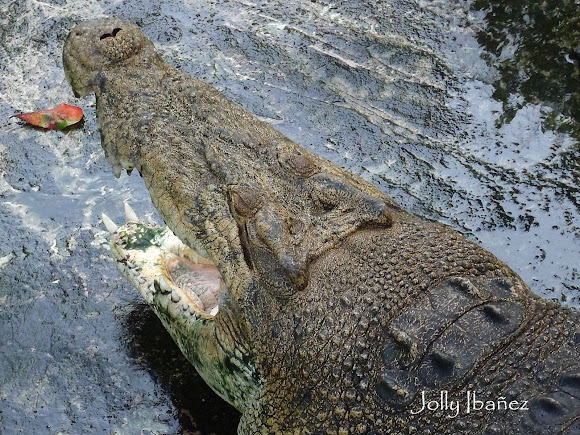 The saltwater crocodile (Crocodylus porosus), also known as the estuarine or Indo-Pacific crocodile, is the largest of all living reptiles. It is found in suitable habitats from Northern Australia through Southeast Asia to the eastern coast of India. Saltwater crocodiles in the Philippines is listed under appendix I of the Convention on International Trade of Endangered Species (CITES). Appendix I includes species threatened with extinction.

Saltwater crocodiles generally spend the tropical wet season in freshwater swamps and rivers, moving downstream to estuaries in the dry season, and sometimes travelling far out to sea. Crocodiles compete fiercely with each other for territory, with dominant males in particular occupying the most eligible stretches of freshwater creeks and streams. Junior crocodiles are thus forced into the more marginal river systems and sometimes into the ocean. This explains the large distribution of the animal (ranging from the east coast of India to northern Australia) as well as its being found in the odd places on occasion (such as the Sea of Japan). Saltwater crocodiles can swim at 15 to 18 miles per hour (6.7 to 8.0 m/s) in short bursts, but when cruising they go at 2 to 3 mph (0.9 to 1.3 m/s).

All crocodiles on this spotting has been photographed inside the crocodile farm in Puerto Princesa City Palawan Philippines. The skeleton on display is of a 17-foot saltwater crocodile who devoured half of the fisherman in Barangay Rio Tuba, Bataraza, Palawan. The animal was captured after the incident and was kept at the crocodile farm and later died. The farm is commercially breeding saltwater crocodiles to make leather goods like handbags when they reach 3 years of age. The meat is being sold as exotic food.

I didn't know they were in the Philippines. Hope they survive. Good info thanks.