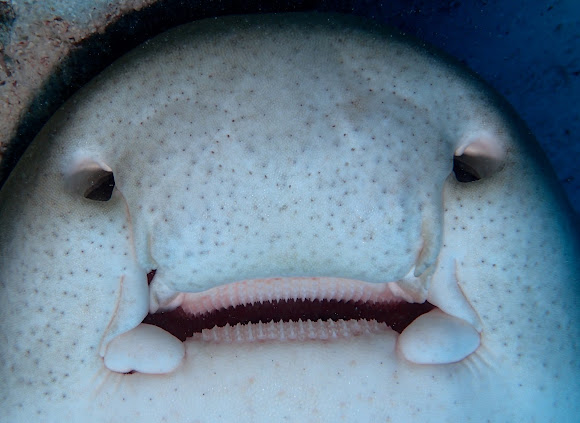 This Zebra Sharks - Stegostoma fasciatum is often confused with Leopard Sharks - Triakis semifasciata. Adults Zebra Sharks are light brown in colour with black spots whereas juveniles are with black stripes, hence its common name. This pair of Leopard Sharks were seen in the midst of their 'courting ritual', with the male Shark 'biting' the female's tail to put her into tonic immobility. Tonic immobility is a natural state of paralysis which animals enter, often called animal hypnosis. Its function is not certain. It may be related to mating in certain animals like sharks. When the female Shark is in tonic immobility, she lays upside down, hardly moving and from time to time, we can see the male Shark 'biting/nibbling' the tail of the female Shark, which continues to put her in tonic immobility. This 'courting ritual' may goes on for hours before the actual mating takes place. We spend more than 30 minutes observing this behaviour, but ran out of bottom time and did not get to see the copulation.

Pic#1- close-up of the female's face, showing not all sharks have sharp teeth. Pic#2 - the female lying upside down in tonic immobility Pic#3 - close-up of male biting the female's tail Pic#5 - showing the whole pair of Zebra sharks

Thanks, @Daniele and PN for the join 3rd place :)

Wow! Awesome moment and great deal of information! Thanks for sharing, Albert!

Thanks, @Daniele for this SOTW :)

Thanks too, @Luis, @Sergio, @Bonnie, @Dilan, @triggsturner and @Felix for your kind words and support.
Glad you guys find this Spotting interesting :)

Congratulations Albert, this fantastic series has been voted Spotting of the Week! Thank you for your ongoing contributions to Project Noah!

Thanks, @Daniele for the nomination.

Thanks, @Mark for the appreciation. This is my second time to encounter them in this situation. The previous time was 2 years ago in Malaysia with this Spotting :

And I posted a video link to it too :D

Amazing. Thanks for sharing this Albert.

Your spotting has been nominated for the Spotting of the Week. The winner will be chosen by the Project Noah Rangers based on a combination of factors including: uniqueness of the shot, status of the organism (for example, rare or endangered), quality of the information provided in the habitat and description sections. There is a subjective element, of course; the spotting with the highest number of Ranger votes is chosen. Congratulations on being nominated Albert!

Thanks, @Ava for your kind comments :)