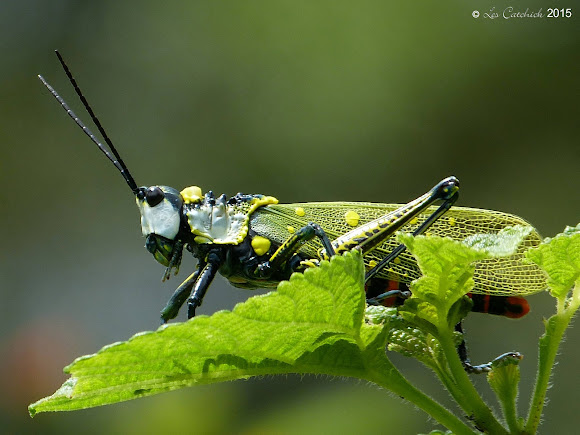 Side of a dirt track en route from Munnar to Thekkkady. but much nearer to Thekkady.

The location on the map is only rough. From the Journal of Orthoptera Research - Sep 2011 This species exists as several subspecies across south Asia, perhaps representing local genetic adaptation. It is polyphagous and a minor agricultural pest, and is usually managed via insecticides and egg-bed destruction. For much of its range, populations appear healthy and are not threatened. In contrast, within the Western Ghats Biodiversity Hotspot in south India, A. miliaris is sparse and listed as Near-Threatened. In this area the insect is an occasional minor agricultural pest. Considering its local rarity, versus its abundance in other geographic areas, we recommend that in south India A. miliaris needs to be conserved at the present time. During localized outbreaks, we recommend that A. miliaris be managed via mechanical collection of nymphs and adults, and destruction of egg pods, rather than intervention using insecticides. So in the Western Ghats, unlike elsewhere in its range, it is not common.

There were very large numbers of similar ones on my recent trip to Peru. I have a common name for them but have not got to look at the photos yet.

Wonderful one! I have seen one in Thailand, but unfortunately only in the dark.

The latest trip was by far the best I have ever had for insects. Well beyond my expectations. When I eventually sort the photos some will appear on Project Noah for ID help.

You are welcome Les Catchick, Peru have a fantastic biodiversity,congrats again and we will here to se your next finds :-)

Thanks Antonio.
I have just returned from Peru and saw literally hundreds of similar ones there - amazingly common. No doubt not the same species as this one exactly.

Awesome capture Les Catchick,congrats and thanks for sharing