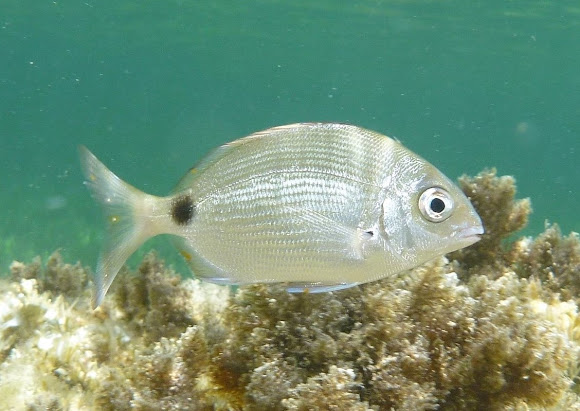 It is the smallest of the genus of Diplodus sp. The body is compressed, oval, with a slightly prominent mouth, although the lips are thin. Its unmistakable characteristic is the black stain that they have on the caudal peduncle (beginning of "the tail"), which forms a ring that surrounds that part of the body. Adults are uniformly silver, with pelvic fins slightly yellowish. In young individuals we can find five lateral transverse lines.

Rocky bottoms and seagrass meadows of Cabo de Palos (Murcia). When they are young they form more or less numerous groups, and when they are adults they become more solitary, living alone or in pairs. Its distribution is mainly the eastern Mediterranean, and the Atlantic coast of Spain. In the Cantabrian Sea, the African Atlantic coast, Madeira, the Canary Islands and the western Mediterranean (up to the Black Sea), it can be found, although it is rare to see.