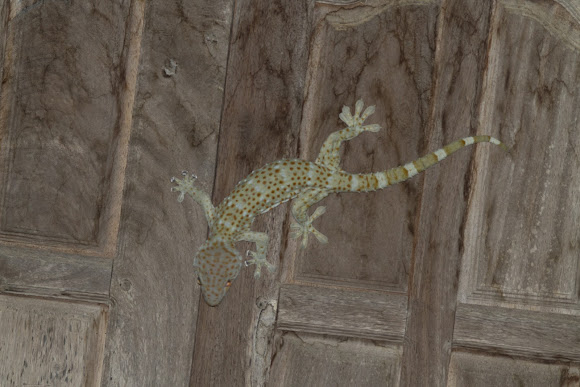 The tokay gecko (Gekko gecko) is a nocturnal arboreal gecko in the genus Gekko, the true geckos. It is native to Asia and some Pacific Islands. The Tokay is a large gecko, reaching up to 35 centimeters in length. It is cylindrical but somewhat flattened in body shape. The eyes have vertical pupils. The skin is soft to the touch and is generally gray with red speckles, but the animal can change the color of its skin to blend into the environment. The species is sexually dimorphic, the males being more brightly colored.[1] The male is territorial, attacking other Tokays and other intruders. The female lays clutches of one or two hard-shelled eggs and guards them until they hatch. The Tokay feeds on insects and small vertebrates.[1] It has strong jaws with which it bites through the exoskeletons of rainforest insects. It is a strong climber with foot pads that can support the entire weight of the body on a vertical surface for a long period of time. Compared to other gecko species, the Tokay has a robust build, with a semi-prehensile tail, a large head and muscular jaws. Though common in the pet trade, the strong bite of the Tokay makes it ill-suited for inexperienced keepers

This species occurs in northeast India, Bhutan, Nepal, and Bangladesh, throughout Southeast Asia, including the Philippines and Indonesia, and to western New Guinea in Melanesia. Its native habitat is rainforest, where it lives on trees and cliffs, and it also frequently adapts to rural human habitations, roaming walls and ceilings at night in search of insect prey. It is an invasive species in the Florida Keys. Increasing urbanization is reducing its range