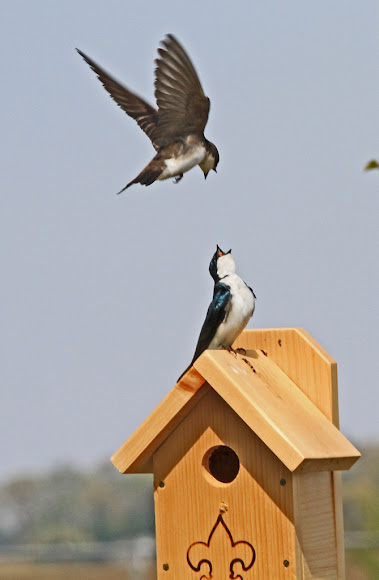 One of our most common and visible birds, the tree swallow is recognized by its metallic blue-green back, white underparts, and slightly forked tail. It breeds from the edge of the tree line in northern Canada to the southern tier of the United States and winters from the Gulf Coast south. In migration it can be seen anywhere and sometimes gathers in flocks of more than a million birds. It breeds in natural cavities and bird boxes, almost always near water. The ready availability of man-made nest sites has helped it spread in many areas. The song is a rapid series of often paired whistled notes. The most common calls include a rapid twittering and short, high, buzzy zee notes.

Tree Swallows nest in natural or artificial cavities near water and are often found in large flocks. They readily use nest boxes, including those built for bluebirds. Declines in cavity-builder populations are resulting in fewer natural nesting sites for Tree Swallows, although the swallow population remains healthy. The Tree Swallow nest consists of multiple layers of grasses and thin twigs, and is lined with large feathers from other species. The female lays 4 to 7 white eggs and incubates them by herself. The eggs hatch in about 14 days and the hatchlings are altricial. The hatchlings typically fledge in 16–24 days. While there are young or eggs in the nest, adults frequently dive bomb intruders (including curious humans) and attempt to drive them from the area. Tree Swallows are known to "fight" over feathers in mid-air for reasons which are still under investigation. There is some speculation that this is a form of play. Tree Swallows are typically single-brooded, although they may attempt a second nest if the first fails early in the season. There are records of parents raising two successful broods in a season. They subsist primarily on a diet of insects, sometimes supplemented with small quantities of fruit. They are excellent fliers and take off from their perch and acrobatically catch insects in their bills in mid-air.

In the first pic of series, husband and wife are having some words. Looks like she if flying of the handle, but he is standing his ground denying it all.

Wonderful series! He must have been bringing in some big news!