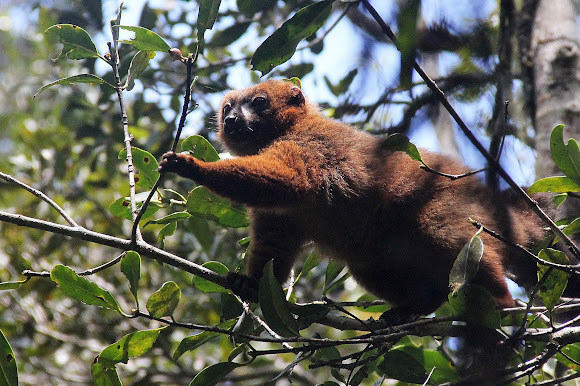 The red-bellied lemur (Eulemur rubriventer) is a medium sized prosimian with a luxuriant chestnut brown coat. This lemur is endemic to eastern Madagascan rainforests and is distinguished by patches of white skin below the eyes, giving rise to a "teardrop" effect, particularly conspicuous in the male. The species, first identified in the year 1850, exhibits diurnal behaviour and marked sexual dichromism. The red-bellied lemur has been studied extensively since the mid-1980s, primarily in Ranomafana National Park. This lemur species is designated as vulnerable according to the IUCN Red List, due to threats endangering habitats from slash-and-burn agriculture in Madagascar. (https://en.wikipedia.org/wiki/Red-bellie...)

Eulemur rubriventer occurs as far north as the Tsaratanana Massif at an elevation of 2,400 metres (7,900 ft), and thence southerly to the Manampatrana River in a narrow strip of eastern Madagascar rainforest. In previous eras the range extended further south to the Mananara River. This species is distributed thinly and is restricted only to intact rainforest; it does not occur at all on the Masolala Peninsula. The red-bellied lemur is sympatric with four other Eulemur species: in the extreme north of its range, the white-headed lemur E. albifrons; at mid-range, the common brown lemur E. fulvus; and in its southern range, the Red-fronted Brown Lemur E. rufus and the Gray-headed Lemur E. cinereiceps. E. rubriventer is however easily distinguished from these relatives by the male's distinctive white eye "tear drops" and the rich darkness of the fur of both sexes. A distinction of appearance occurs within E. rubriventer in that northern range males (e.g. Mantadia National Park north) have a more distinctive reddish belly than the southern range counterparts, as in Ranomafana National Park. The forest type within the red-bellied lemur's range is characterized by dense evergreen vegetation, with a canopy of 25 to 35 metres (82 to 115 ft). Typical canopy species include Dalbergia sp., Diospyros sp., Ocotea sp., Symphonia sp., and Tambourissa sp.; emergents of Canarium sp., Albizia sp., and Brochoneura acuminata are also present. The eastern lowland forests also have a rich diversity of Pandanus sp., bamboo, and epiphytic orchid species. (https://en.wikipedia.org/wiki/Red-bellie...)