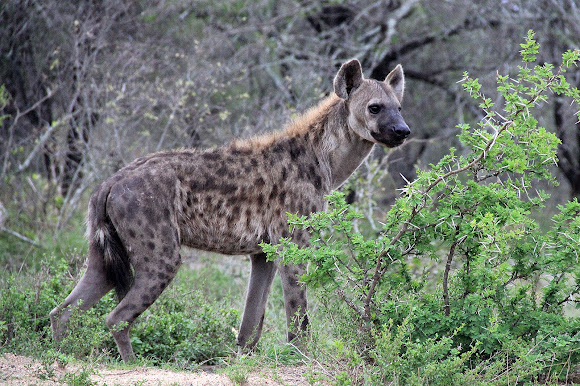 The spotted hyena (Crocuta crocuta), also known as the laughing hyena, is a species of hyena, currently classed as the sole member of the genus Crocuta, native to Sub-Saharan Africa. It is listed as Least Concern by the IUCN on account of its widespread range and large numbers estimated between 27,000 and 47,000 individuals. The species is however experiencing declines outside of protected areas due to habitat loss and poaching. The species may have originated in Asia, and once ranged throughout Europe for at least one million years until the end of the Late Pleistocene. The spotted hyena is the largest member of the Hyaenidae, and is further physically distinguished from other species by its vaguely bear-like build, its rounded ears, its less prominent mane, its spotted pelt, its more dual purposed dentition, its fewer nipples and the presence of a pseudo-penis in the female. It is the only mammalian species to lack an external vaginal opening. (https://en.wikipedia.org/wiki/Spotted_hy...)

The spotted hyena's distribution once ranged in Europe from the Iberian Peninsula to the Urals, where it remained for at least one million years. Remains have also been found in the Russian Far East, and it has been theorised that the presence of hyenas there may have delayed the colonisation of North America. The causes of the species' extinction in Eurasia are still largely unknown. In Western Europe at least, the spotted hyena's extinction coincided with a decline in grasslands 12,500 years ago. Europe experienced a massive loss of lowland habitats favoured by spotted hyenas, and a corresponding increase in mixed woodlands. Spotted hyenas, under these circumstances, would have been outcompeted by wolves and humans which were as much at home in forests as in open lands, and in highlands as in lowlands. Spotted hyena populations began to shrink roughly 20,000 years ago, completely disappearing from Western Europe between 14–11,000 years ago, and earlier in some areas. Historically, the spotted hyena was widespread throughout Sub-Saharan Africa. It is present in all habitats save for the most extreme desert conditions, tropical rainforests and the top of alpine mountains. Its current distribution is patchy in many places, especially in West Africa. Populations are concentrated in protected areas and surrounding land. There is a continuous distribution over large areas of Ethiopia, Kenya, Tanzania, Botswana, Namibia and the Transvaal Lowveld areas of South Africa. The species dwells in semi-deserts, savannah, open woodland, dense dry woodland, and mountainous forests up to 4,000m in altitude. It is scarce or absent in tropical rainforests and coastal areas. Its preferred habitats in west Africa include the Guinea and Sudan savannahs, and is absent in the belt of dense coastal forest. In the Namib Desert, it occurs in riverine growth along seasonal rivers, the sub-desertic pro-Namib and the adjoining inland plateau. In ideal habitats, the spotted hyena outnumbers other large carnivores, including other hyena species. However, the striped and brown hyena occur at greater densities than the spotted species in desert and semi-desert regions. Population densities based on systematic censuses vary substantially, from 0.006 to 1.7 individuals per km². (https://en.wikipedia.org/wiki/Spotted_hy...)