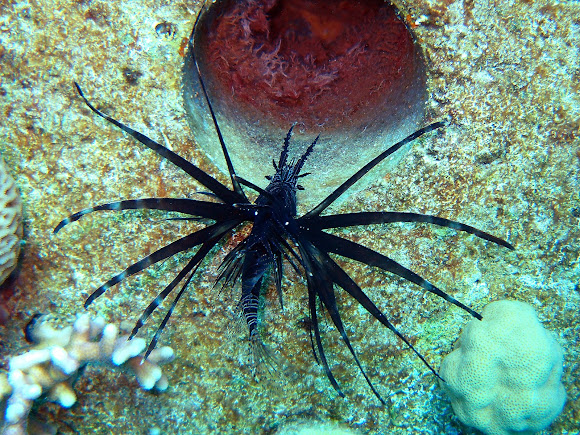 The Black Volitans Lionfish is one of the most durable and long lived and largest of the Lionfish family. The Black Volitans Lionfish is often confused with the P. russelli because of it’s similar appearance. The differences between the two can easily be distinguished by the absence of spots on the dorsal, anal and tailfins as well as the absence of the banded markings on the dorsal spine on the P. russeli. The Black Volitans comes in variations of brown, tan, and dark brown though occasionally you can find them in reddish shades of brown, rust and a very dark brown that is almost black in color. True black is rarely, if ever, available. Black Volitans Lionfish are less affected by bright lights and will spend a lot of it’s time out in the water column. However, it will still spend time in caves, overhangs, on the substrate and other shady spots. The Black Volitans Lionfish will usually tolerate being kept in the aquarium with other Black Volitans Lionfish. Lionfish will eat smaller fishes, ornamental shrimps and crabs. This species is venomous. The pelvic, pectoral and dorsal fins of this animal can cause extreme pain. If allergic, severe reactions can occur. If stung soak injured area in hot water and seek medical attention immediately. Smaller specimens will adapt to captivity and accept captive diets more easily. Lionfish will likely remain hidden in brightly lit aquariums as it prefers dimmer lighting. (https://www.bluezooaquatics.com/productD...)