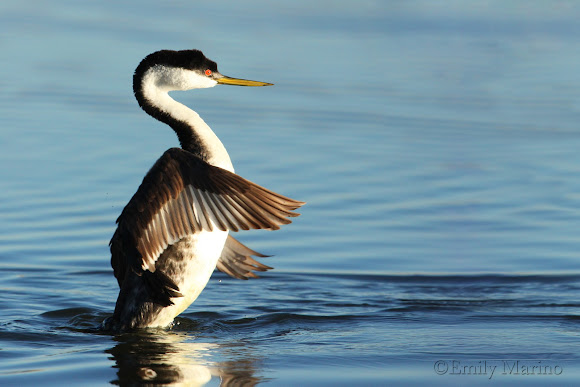 A large, elegant, black-and-white grebe, the Western Grebe breeds in lakes and ponds across the American West and winters primarily off the Pacific Coast. The very similar Clark's Grebe was long thought to be the same species. Both species have a dramatic, choreographed courtship display, in which the birds rush across the water with their long necks extended.

These two Western Grebes were 2 of 7 that came into the Birds of Prey Foundation after a brutal cold snap in Colorado. All had crash landed on icy-wet roads thinking it was open water. Once these water birds were grounded they were unable to take flight again. Two of the 7 had to be euthanized for severe traumatic injuries, 3 were released back into the wild within a week. These two, in addition to their bruises and road rash had moderate frostbite on their toes. However, time and antibiotics allowed them to heal with no permanent damage! They were released close to where they were found. As you can see they were very happy to be free again!

Thank you for the kind words kdpicturemaker! I don't get to draw as much as I used to but at least I have photography as a creative outlet! I certainly love the subject matter!

Beautiful images. You must have some great subjects for your illustrations.

Thank you Dixie and Kathleen!

Great series. Sad that two didn't make it. I liked your notes. They told the story about the pics.

Love your spotting and your information!

Thank you all! This is certainly a special spotting to me! I went back the next day to check on them and they were long gone! Hopefully they migrated South!

Very nice spotting! I am happy to hear that they are healed!

Good to hear that some could be rehabilitated!

They are Ashley! They might be my favorite non-raptor! Thanks for look'n! ;)

So sad to thing about those kinds of things happening :/ Glad these guys healed just fine, they are beautiful!