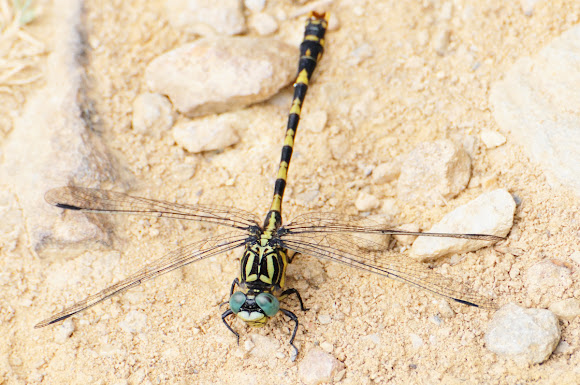 This 'dragonfly' is bigger and rarer than the 'Small Pincertail' (Onychogomphus forcipatus). The species' most distinguishing features include its bright-blue eyes (as opposed to O. forcipatus' grey-to-green eyes), and the relatively wide, parallel black stripes on the side of the thorax. The front black line on the side of the thorax does not touch the midline. The yellow collar at the front of the thorax is interrupted by a black bar. It has four cells on the anal triangle of the rear wing, but no yellow line on the 'vertex'. 'Cercoids' are always yellow. Structurally more important is the absence of a so-called subterminal knob on the male's lower appendage which is present in male O. forcipatus. The adults grow up to 65 millimetres long and can be encountered close to running water and lakes from mid April through late August. Their life cycle lasts about three years.