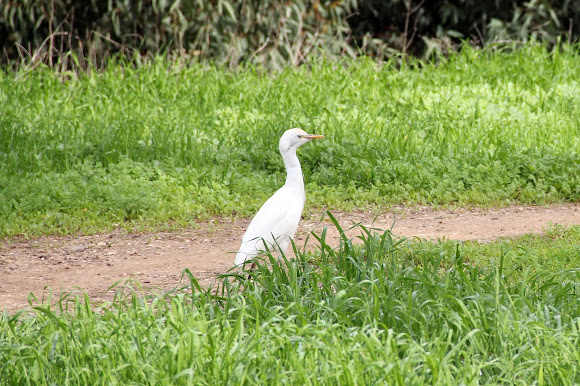 The cattle egret is a stocky heron with an 88–96 cm (35–38 in) wingspan; it is 46–56 cm (18–22 in) long and weighs 270–512 g (9.5–18.1 oz). It has a relatively short thick neck, a sturdy bill, and a hunched posture. The non-breeding adult has mainly white plumage, a yellow bill and greyish-yellow legs. During the breeding season, adults of the nominate western subspecies develop orange-buff plumes on the back, breast and crown, and the bill, legs and irises become bright red for a brief period prior to pairing. The sexes are similar, but the male is marginally larger and has slightly longer breeding plumes than the female; juvenile birds lack coloured plumes and have a black bill. (https://en.wikipedia.org/wiki/Cattle_egr...)

The cattle egret has undergone one of the most rapid and wide reaching natural expansions of any bird species. It was originally native to parts of Southern Spain and Portugal, tropical and subtropical Africa and humid tropical and subtropical Asia. In the end of the 19th century it began expanding its range into southern Africa, first breeding in the Cape Province in 1908. Cattle egrets were first sighted in the Americas on the boundary of Guiana and Suriname in 1877, having apparently flown across the Atlantic Ocean. It was not until the 1930s that the species is thought to have become established in that area. The species first arrived in North America in 1941 (these early sightings were originally dismissed as escapees), bred in Florida in 1953, and spread rapidly, breeding for the first time in Canada in 1962. It is now commonly seen as far west as California. It was first recorded breeding in Cuba in 1957, in Costa Rica in 1958, and in Mexico in 1963, although it was probably established before that. In Europe the species had historically declined in Spain and Portugal, but in the latter part of the 20th century it expanded back through the Iberian Peninsula, and then began to colonise other parts of Europe; southern France in 1958, northern France in 1981 and Italy in 1985. Breeding in the United Kingdom was recorded for the first time in 2008 only a year after an influx seen in the previous year. In 2008 cattle egrets were also reported as having moved into Ireland for the first time. In Australia the colonisation began in the 1940s, with the species establishing itself in the north and east of the continent. It began to regularly visit New Zealand in the 1960s. Since 1948 the cattle egret has been permanently resident in Israel. Prior to 1948 it was only a winter visitor. (https://en.wikipedia.org/wiki/Cattle_egr...)