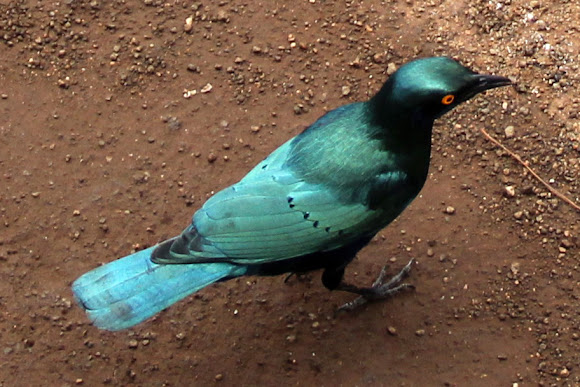 The Cape starling has an adult length of about 25 cm (10 in) and weight of about 100 grams (3.5 oz). The plumage is a fairly uniform bright, glossy colour. The head is blue with darker ear coverts and the upper parts of the body are greenish-blue. It has a lengthy warbling song which may include an imitation of sounds it hears in its environment. (https://en.wikipedia.org/wiki/Cape_starl...)

The Cape starling is found in the southern part of Africa. Its range encompasses the extreme south of Gabon, the west and south of Angola, the extreme south of Zambia, the southern half of Zimbabwe, Namibia, Botswana, Lesotho and South Africa. It is a vagrant to the Republic of the Congo but does not breed there. In the other countries in its range it is a resident (non-migratory) species and its total extent of occurrence is about 3,000,000 square kilometres (1,200,000 sq mi).[4] The Cape starling is found where trees in which it can roost and nest are found. It is not a bird of dense forest or of pasture and is not associated with any particular plant type. It does occur in open woodland, plantations, savannah, bushveld, rough grassland, parks and gardens and is quite numerous in the central Kalahari where isolated trees occur. (https://en.wikipedia.org/wiki/Cape_starl...)