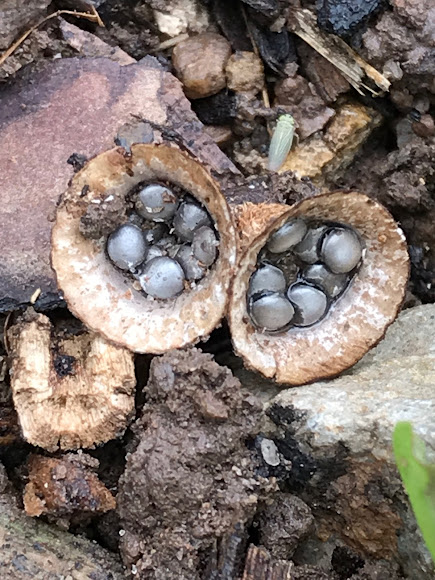 Species in the genus Cyathus have fruit bodies (peridia) that are vase-, trumpet- or urn-shaped with dimensions of 4–8 mm wide by 7–18 mm tall. Fruit bodies are brown to gray-brown in color, and covered with small hair-like structures on the outer surface. Some species, like C. striatus and C. setosus, have conspicuous bristles called setae on the rim of the cup. The fruit body is often expanded at the base into a solid rounded mass of hyphae called an emplacement, which typically becomes tangled and entwined with small fragments of the underlying growing surface, improving its stability and helping it from being knocked over by rain.

In our garden in Windwardside, at the foot of the Volcano Mount Scenery in the Caribbean Sea.

Species of Cyathus are also known as splash cups, which refers to the fact that falling raindrops can knock the peridioles out of the open-cup fruit body. I found these little cups in the garden yesterday when I pulled out weeds. I took the first two pictures, got distracted and when I went back later could not find them again. Today I looked again and suddenly I did notice them. This time I took them inside to take some pictures with a Dime for measure. When finished I put them where I found them yesterday. FYI - they were never attached to anything it seemed.

Thank you for the nomination Machi! Alway makes my heart happy.
Thank you for your messages Tukup, Neil Ross, and Maria dB.
Haven't seen any recently but it has been very dry here on the volcano. Rain has just arrived so I hope to start seeing some soon again.
I will keep you posted!
;-)

Congratulations on the nomination for SOTW Muckpuk. Well done.

Nice spotting, Muckpuk. I'd love to see this type of fungus. Thanks for throwing down the coin too. I wasn't too sure of the actual size, so that helps! And wonderful notes too. Congrats on your SOTW nomination :)

Nice series. In North Carolina, USA, we have a similar fungus and I thought it was very cute when I first saw it. :)

I guess lots of people miss them. You have to be wearing your glasses! :-) I think I saw many of them before registering them so one day I decided to have a closer look. They kind of hide in between rocks and soil.
Once I saw one I have found many more.
They do seem to disappear though, like they shrivel up and they are seasonal. Everything needs to be just right, temperature, air humidity, nutrients and light.
Good luck.

I have yet to see any of these, although they are supposed to be found here. Thanks for sharing Muckpuk.