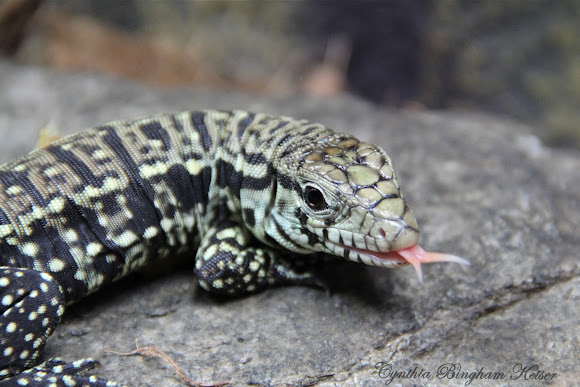 This is my daughters pet Tegu. It's only 2 months old and is a very mellow, intelligent and beautiful part of the family. "As hatchlings they have a yellow complexion with black markings; the yellow eventually fades to white within a couple of months after shedding. Adult males are much larger than the females and can reach 3 feet in length at maturity and continue to grow to lengths of 4-4.5 feet. The females are much smaller reaching up to 3 feet in total length, from nose to tail. They have beaded skin and linear stripes running down their bodies." - Wikipedia

"hey are an omnivorous terrestrial species that inhabit the tropical rain forests of east and central South America. " - Wikipedia

Aka Argentine Giant Tegu. "A level of intelligence unusually high for reptiles has been observed, along with a high level of physical activity during the wakeful period of the year. It is believed that individuals of this species sometimes actively seek human attention, as would for example a cat or dog. Argentine tegus make good pets, as they have a tendency to become attached to their owners and are generally quite docile as adults. A well cared for animal will live for 15 to 20 years in the wild, and possibly even longer in captivity. However, as with most reptiles, if not handled regularly they will show more aggressive signs since they are less comfortable with the handler." - Wikipedia