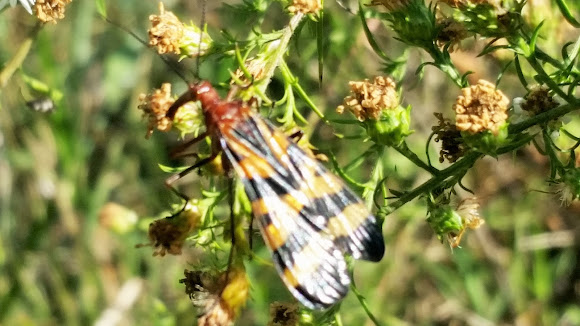 Panorpa nuptialis is one of only a few American species that can be easily told apart by their wing patterning. The wings are orange and have strong, angulate black bands. The body color is also darker than most Panorpa, ranging from reddish-orange to a rust color. Unlike most scorpionflies, they prefer more open areas on the edges of forest or fields of soy and other crops.

Spotted on wildflowers in a meadow next to a forest.

SCORPIONFLIES: refers to the appearance of the male's 3-segmented terminal appendage, which is held in an upward recurved position, and the last segment is bulbous at the base and sharply pointed at the tip, like a scorpion's stinger [scorpionflies do not sting] Scavengers, mostly. Adults feed mainly on dead or moribund (dying) insects; rarely on nectar, fruits: Larvae are scavengers, feeding on soft-bodied dead insects.