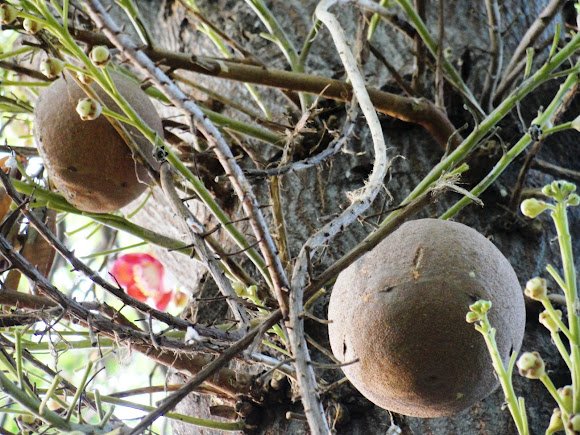 Cannon ball trees usually carry 'CAUTION' signs posted on the trunks to advise people not to stand close to and directly under the fruits as one can get hurt as they drop off by themselves. Couroupita guianensis, whose common names include Ayahuma and the Cannonball Tree, is an evergreen tree allied to the Brazil Nut (Bertholletia excelsa), and is native to tropical northern South America and to the southern Caribbean. In India it has been growing for the past two or three thousand years at least, as attested by textual records[citation needed]; hence it is possible that it is native to India also. It's part of the family Lecythidaceae and grows up to 25m (82ft) in height. The "Cannonball Tree" is so called because of its brown cannon-ball-like fruits. The majority of these trees outside their natural environment have been planted as a botanical curiosity, as they grow very large, distinctive flowers. Its flowers are orange, scarlet and pink in color, and form large bunches measuring up to 3m in length. They produce large spherical and woody fruits ranging from 15 to 24cm in diameter, containing up to 200 or 300 seeds apiece. Fruits and dispersal The tree gets its common name from the large, spherical fruits it produces. The fruit falls from the tree and cracks open when it hits the ground when mature, often causing the sound of a small explosion. The fruit emits an unpleasant aroma when exposed to the air. Individual seeds within the "ball" are coated with hair, which is thought to protect the seed when it is ingested and may also help in the passage of the seed through the intestines. The cannonball tree and it's fruit are thought by some to be remnants of the last ice age, like the "hedge apple" or "osage orane" of north America. The fruit is thought to be an adaptation provided for the giant ground sloth, a long extinct species. Today instead of seeds being dispersed by the large extinct mammal, the fruit simply rots around the base of it's mother tree. Like coconut palms, the trees should not be planted near paths or near traffic-filled areas, as the heavy nut is known to fall without notice.

Medicinal uses The Cannonball Tree possesses antibiotic, antifungal, antiseptic and analgesic qualities. The trees are used to cure colds and stomach aches. Juice made from the leaves is used to cure skin diseases, and shamans of South America have even used tree parts for treating malaria. The inside of the fruit can disinfect wounds and young leaves ease toothache[citation needed]. The fruit emits an unpleasant odor and can be used as an insect repelent just by rubbing it to the skin or clothes.

The trees are grown extensively in Shiva temples in India. In Hindi it is called Shiv Kamal and also known as "Kailaspati". It is called the Nagalingam tree in Tamil. The flowers are called Shivalinga flowers in Hindi; Nagalinga Pushpa in Kannada; Nagamalli flowers or Mallikarjuna flowers in Telugu. Hindus revere it as a sacred tree because the petals of the flower resemble the hood of the Naga, a sacred snake, protecting a Shiva Lingam, the stigma. In Sri Lanka, Thailand and other Buddhist countries the tree is often planted at Buddhist temples. It is here mistaken as the Sala tree, Shorea robusta, the tree under which the Buddha died and under which the previous Buddha Vessabhu attained enlightenment.

Thank you ceherzog for visit,

A good finish to the series!

Thanks Nopayahnah, In India it has been growing for the past two or three thousand years at least, *as per wiki

In Hindi it is called Shiv Kamal and also known as "Kailaspati".