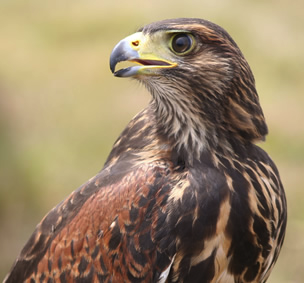 The Harris's Hawks (Aguililla de Harris -spanish-) is a medium - large bird of prey (Birds of prey are birds that hunt for food primarily on the wing, using their keen senses, especially vision). The domain of Harris's Hawks extends from the south United States to and central Chile and Argentina. This birds are used frequently in the falconry arts to pest controls in the airports zone.

Harris's Hawks live in sparse woodland and semi-desert, as well as marshes (with some trees) in some parts of their range (Howell and Webb 1995), including mangrove swamps, as in parts of their South American range. Harris's Hawks are permanent residents and do not migrate.

This shot is of a falconry bird. The bird was very special, really seemed to want to be photographed.