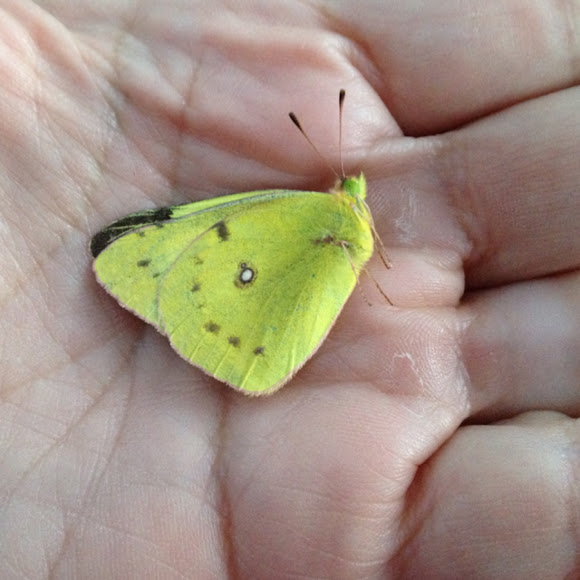 Beautiful sulphur yellow butterfly. On rare occasions, you can see the brownish black on it's wings when it flies. This specimen was unconscious due to the cold (see first photo) and not dead as I first suspected. I found it laying on its side on the ground.

It got so unusually chilly last evening, it knocked this poor guy out cold. I saw this little guy laying on its side in the grass and assumed it was dead. I gingerly picked it up do I wouldn't damage the scales on its wings & laid it in my hand to take a photo. The warmth of my hand helped to revive him from the cold and he perched on my finger. I then had him crawl from my finger to the trunk of a tree and bid him farewell. I like the way the setting sun shone through his wings to show the shadow of his body hidden between his wings. I've never gotten so close to one that was so still. He was on the same tree trunk the next morning, but was gone by the time I got home.

The first photo cracks me up - knowing that this guy was asleep and not dead - with the legs straight out - it's like someone told him he lost all his money in the stock market and fainted dead away.