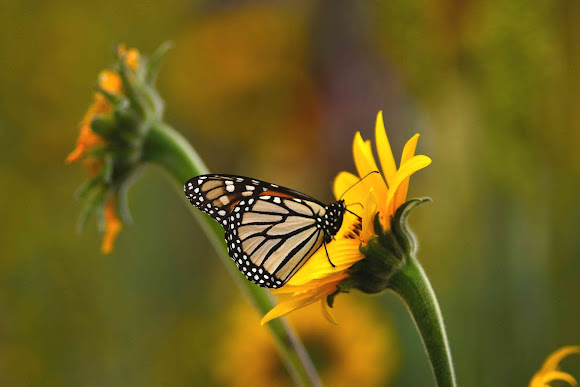 Its wings feature an easily recognizable orange and black pattern, with a wingspan of 8.9–10.2 cm (3½–4 in)[3] (the viceroy butterfly is similar in color and pattern, but is markedly smaller, and has an extra black stripe across the hind wing). The eastern North American monarch population is notable for its multigenerational southward late summer/autumn migration from the United States and southern Canada to Mexico, covering thousands of miles.

Overwintering populations of D. plexippus are found in Mexico, California, along the Gulf coast. The overwintering habitat typically provides access to streams, plenty of sunlight (for body temperatures that allow flight), appropriate vegetation on which to roost, and is relatively free of predators. Overwintering, roosting butterflies have been seen on sumacs, locusts, basswood elm, oak, osage orange, mulberry, pecan, willow, cottonwood, and mesquite. During the fall migration, butterflies must have access to nectar-producing plants.

Somewhere at the Sierra Madre near Jaumave, Tamaulipas, Mexico,