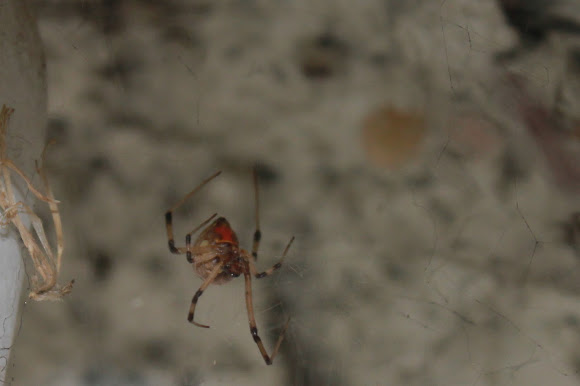 L. geometricus is generally lighter in color than the black widow species—the color can range from tan to dark brown to black, with shades of grey also possible. Like the black widow species in the United States, L. geometricus has a prominent "hourglass" marking on the underside of the abdomen; the brown widow's hourglass, however, is usually a vivid orange or a yellowish color. Unlike the black widow, L. geometricus has a black-and-white "geometric" pattern on the dorsal side of its abdomen. Although the Latin name comes from this pattern, a spider's coloring can and does darken over time and the pattern may become obscured. Brown widows are often preyed on by mud daubers and sometimes by digger wasps.

I found this one in my garden under neath a lawn ornament.

Brown widows can be located by finding their eggsacks, which are easily identifiable. They resemble a sandspur, having pointed projections all over, and they are sometimes described as "spiky" in appearance. Eggs hatch in approximately 20 days