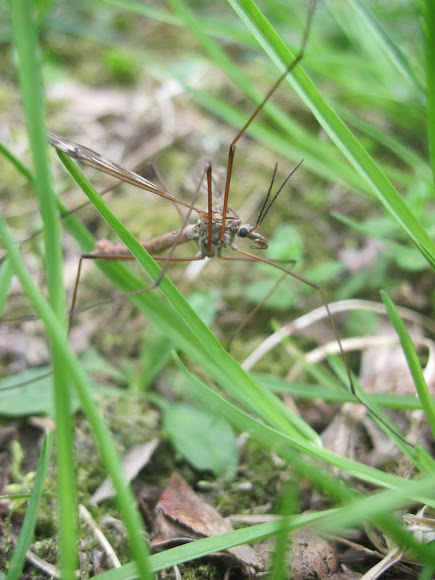 A crane fly is an insect in the family Tipulidae. Adults are very slender, long-legged flies that may vary in length from 2–60 millimetres (0.079–2.4 in) though tropical species may exceed to 100 millimetres or 3.9 inches. In the United Kingdom, Ireland, Newfoundland and Nova Scotia they are commonly referred to as daddy longlegs, but this name can also refer to two unrelated arthropods: members of the arachnid order Opiliones (especially in the United States and Canada) and the cellar spider Pholcidae (especially in Australia). The larva of the European Crane Fly is commonly known as a leatherjacket. These larvae can cause damage to lawns by feeding on the roots of grass plants. Numerous other common names have been applied to the crane fly, many of them more or less regional, including mosquito hawk, mosquito eater (or skeeter eater), gallinipper, and gollywhopper. At least 4,256 species of crane flies have been described, most of them (75%) by the specialist Charles Paul Alexander. This makes Tipulidae one of the largest families of Diptera (although smaller than Limoniidae, one of the other extant families of crane flies). Crane flies have very long legs, and a long slender abdomen. The wings are often held out when at rest, making the large halteres easily visible. Unlike most flies, crane flies are weak and poor fliers with a tendency to "wobble" in unpredictable patterns during flight, and they can be caught without much effort. Crane flies vary in size, with temperate species ranging from 2 to 60 millimetres (0.079 to 2.4 in), while tropical species have been recorded at over 100 millimetres (3.9 in). The giant crane fly (Holorusia rubiginosa) of the western United States can reach 38 millimetres (1.5 in). Some Tipula species are 64 millimetres (2.5 in). Many smaller species are mosquito-sized, but they can be distinguished from mosquitoes by the V-shaped suture on the thorax, nonpiercing mouthparts, and a lack of scales on the wing veins. Female abdomens contain eggs, and as a result appear swollen in comparison to those of males. The female abdomen also ends in a pointed ovipositor that may look somewhat like a stinger, but is completely harmless. Adult mouthparts may occur on the end of the crane fly's long face, which is sometimes called a snout or a short rostrum. Larvae have a distinct head capsule, and their abdominal segments often have long fleshy projections surrounding the posterior spiracles (almost like tentacles).

From: http://en.wikipedia.org/wiki/Crane_fly He flew into the grass, which gives him the appearance of a spider.