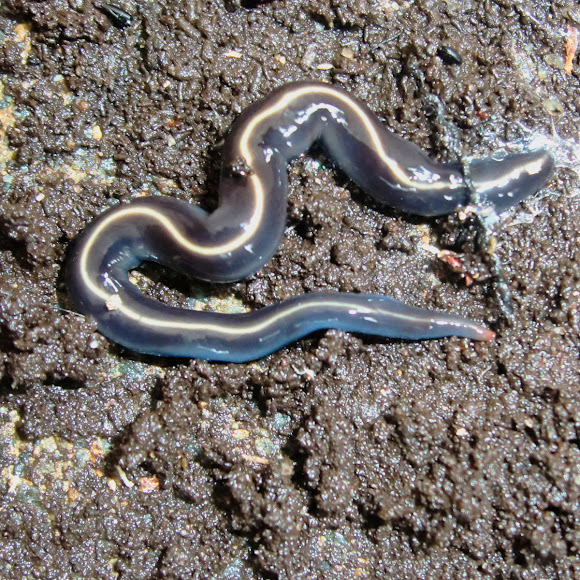 Platyhelminthes, Tricladida, Geoplanidae, Geoplaninae.... "Flatworms range between 1 and 20 cm in size, and are predators of other invertebrates such as earthworms, snails, slugs, insects and chelicerates, which they hunt for, attack and capture using physical force and the adhesive and digestive properties of their mucus. They lack water-retaining mechanisms and are therefore very sensitive to humidity variations of their environment. Because of their limited ecological requirements, some species have been proposed as indicators of the conservation state of their habitats. They are generally animals with low vagility and with very specific habitat requirements, so they can be also used to accurately determine the distribution of biogeographic zones. Today the fauna of these mostly rather fragile animals is being used to select conservation priorities in the Atlantic rainforest in southern Brazil. At the other extreme, one species in this family, Platydemus manokwari has become an invasive species in both disturbed and wild habitats in the Pacific Islands, and has damaged the endemic land snail faunas. Despite their delicate aspect these terrestrial flatworms are voracious predators. All planarians feed through a muscular and reversible pharynx located in ventral side of the body. The pharynx is an extensible tube-like mouth, it bears complex muscular coat that specialized as a penetration organ for those planarians that feed on arthropods; or as a grasping for those planarians that feed on other soft bodied invertebrates such as earthworms. Pharynxes are equipped with glandular secretions that externally digest and dissolve their prey." - wiki

Mark, I tried clicking on the website you printed but it only brought me to the start, where I was before. I obviously don't know what to click to get into anything.

Mark, I went to the BowerBird site & joined but I couldn't find a way to get into anything, much less the flat worms.

Hi again Meredith.. the orange ones are in a complex called Australoplana - there are a few that look identical so species is hard to determine. Here's an orange one I found a couple of weeks ago http://www.projectnoah.org/spottings/382...
and an even more interesting one with nice stripes http://www.projectnoah.org/spottings/804...
Also here's a better link to the BowerBird flatworms http://www.bowerbird.org.au/home/sightin...

Hi Meredith... you live lust around the corner ! :) These creatures are quite different from your common earthworms. Like most life forms they don't cause a problem in their home country but these Aussie ones have caused just as serious problem as their hammerhead cousins when taken to other parts of the world... Pacific islands, UK, South America etc. If you want to learn as much detail as possible about these you could visit BowerBird (a Victoria museum website) . We have been in touch with the CSIRO expert there (Dr Leigh Winsor) who has been more than helpful with information and identities. http://www.bowerbird.org.au/ search for flatworms

I live in Doveton, Victoria, Australia & have been finding these when digging the garden. They scared me at first because they look like tiny snakes to me, although I think even new born snakes are bigger & drier. They stretch & contract dramatically & are slimy. I have found them in black, vivid blue & orange. I can't find any reference to orange ones though. As far as I know, they're not destructive to other worms like the hammerhead worm in other countries. They are listed as belonging to south eastern Australia but other references say they were accidentally imported from another country. Not easy to find a description that will bring up information on internet but with perseverance, I found that blue, flat earthworm did it then I found out its proper name caenoplana coerulea. I thought it might be a type of leech but am relieved to know its just another type of worm.

Thanks oxyjack and Leanne. I don't think it would be hard to find more of them Leanne. I would probably only need to turn over some damp timber (although I always feel a little guilty doing that). Here's one I found just over the road under some discarded chipboard but it's cream-olive with an orange stripe. http://www.projectnoah.org/spottings/804...
I'm amazed at how varied they are and yet how little seems to have been done to identify them in Aus.

I hope you get to spot him again then. Looking at him....he looks like his stripe would glow in the dark, but maybe that's just my fairy-loke imagination running wild ;) I really like him.

Indeed! Thanks for the correction!

@annorion .. thanks.. did you lose an "R" in Turbellaria :)
@CameronWhite .. Not really. This is called a flatworm although not related to earthworms either. It's closest relatives are some of the amazing sea creatures you can find in PN by people like EricNoora, Blogie, Aizpuru. Here is an example of a closer relative... http://www.projectnoah.org/spottings/831...

A planarian is a non parasitic flatworm of the class Tubellaria.

Very cool. Is this some type of slug?

Thanks people. Leanne I just thought I should have used flash also because the blue really changed in different light.

Wow! A blue one! It's beautiful.